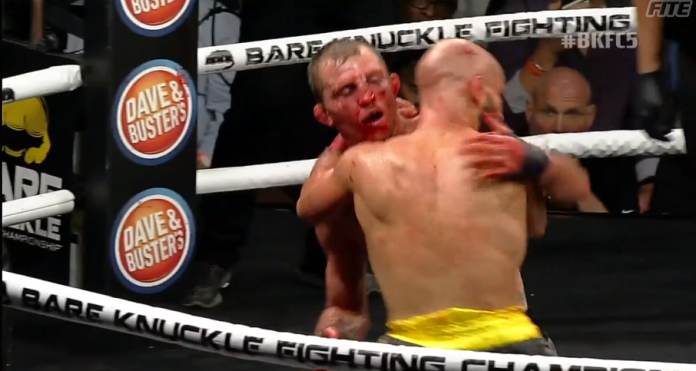 BKFC 5 had a rock-solid main even tonight in Artem Lobov vs. Jason Knight.

Lobov and Knight closed the show at the Mississippi Coast Coliseum in Biloxi, Mississippi.

After runs in the Ultimate Fighting Championship (UFC), both Knight & Lobov find themselves on the bare knuckle proving ground. Both men have fighting styles that seem advantageous to the BKFC rule set. Don’t blink.

Lobov moves forward with his hands down and Knight sends him to the canvas with a left hand. Lobov gets back up and answers to an eight count. The fighters exchange and Knight has a cut on his left eye. Lobov clips Knight and he goes down. Knight answers the count. Both fighters are slipping everywhere. The round ends.

The bell sounds and Lobov moves forward with his hands up. He catches Knight with a right hand. Knight walks through it. Knight gets dropped with a right hand. He answers the count. The fighters stand and trade with wild swings. Amazingly, no one got dropped. Knight cracks Lobov as the second round ends.

Knight’s face looks like hamburger meat to start round four. Knight pumps the jab to start. Lobov winds a left. He goes to Knight’s body. Lobov lands a clipping right, then goes to the body. Knight throws a lunging jab. Knight lands a hard right, Lobov answers with a left hand. Both fighters wing punches. The round ends.

The fighters toe the line. Knight pops his jab. He presses forward. They tie up and Knight lands some quick uppercuts. Lobov lands a straight left hand. He ties Knight up. Lobov is exhausted. Knight lands an uppercut, he presses Lobov against the ropes and unloads. The bell sounds.