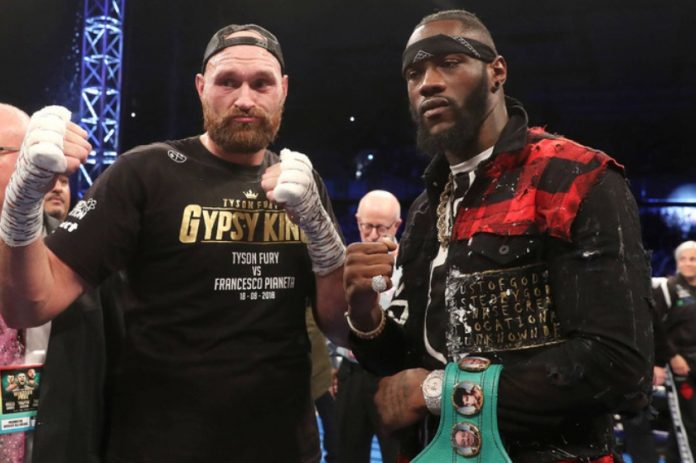 Top Rank promoter Bob Arum has signed heavyweight Tyson Fury to a co-promotional deal to fight on the ESPN platforms. Now it is Deontay Wilder’s turn.

World titleholder Wilder is not currently signed to a promoter. And p that’s why Arum promised to send the champion a “tremendous offer” including his anticipated Fury rematch.

Wilder’s co-manager Shelly Finkel declined to give too many details on the offer. However, he did tell ESPN on Friday (Feb. 22, 2019) he had indeed received an offer from Top Rank for a multi-fight deal for Wilder that would include the rematch with Fury.

“They made an offer. I wrote back that we received it. We will review it and we will respond,” Finkel said. “If we are amenable to the offer, we will be able to get something done. If the terms are amenable to us, something will happen, If not, it won’t.”

Finkel explained that he would look the offer over with fellow co-managers Al Haymon and Jay Deas (Wilder’s trainer), as well as the man himself.

“We will all talk it through and then we will make a decision,” Finkel said. “That’s how we do it. But we want the rematch, so that is not the issue.”

Wilder, 33, is from Tuscaloosa, Alabama. In the past, he had been aligned with Showtime and Haymon’s Premier Boxing Champions. But he has said he is not contractually tied to any network.

With the Wilder and Fury camps nearing a deal, the WBC ordered them to fight next and set a purse bid date. Twice it was postponed. Then came Fury’s signing with Top Rank, leaving the rematch up in the air.

On Friday, Mauricio Sulaiman WMC President said that he has been in communication with each pugilist’s side to see where talks for the rematch stand.

“There will be no further comments until the WBC receives official communication from both sides by Tuesday, Feb. 26th,” Sulaiman said.