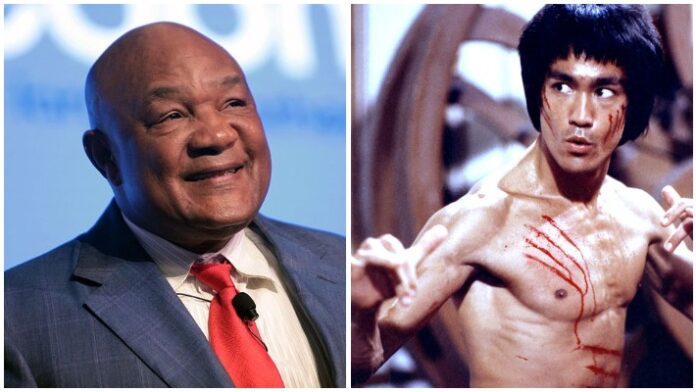 Bruce Lee could have been a world champion boxer according to George Foreman – one of the sport’s biggest legends. Foreman made the comments in a new book called Bruce Lee: The Life of a Legend’ which follows the life of the Martial Arts expert. The book was released on July 20 to mark the anniversary of Lee’s death.

Foreman admits he was left with chills when watching Lee in films and he believes the late actor who would’ve turned 80 this year could’ve have been a world champion boxer if he want too.

“Bruce Lee was a good athlete and he could’ve been a good boxer,” Foreman said. “He could have been anything. In his weight class, he would have been a boxing champion. I remember I was in Hawai in 1973 and I wet to see the movie Enter The Dragon. When I walked out after the movie, on all my back I had chills on me! I was the heavyweight champion of the world, by the way, but all I could think was, wow! I was in shock. He left all the audiences awestruck. Bruce Lee changed everything.”

Lee died at the peak of his powers in 1973 after suffering a brain injury. He is credited with bringing martial arts to the masses and helping pave the way for the sport of MMA.

Foreman was a two-time heavyweight boxing champion who retired  from the sport in 1997 at the age of 48. His monstrous record boasts 76 wins with just five defeats. The 71-year-old is revered as one of the best fighters of all-time.

Do you agree with George Foreman? Could Bruce Lee have been a world champion boxer?