Home Boxing News Josh Taylor Confident He Will Knock Out Jose Ramirez To Claim All... 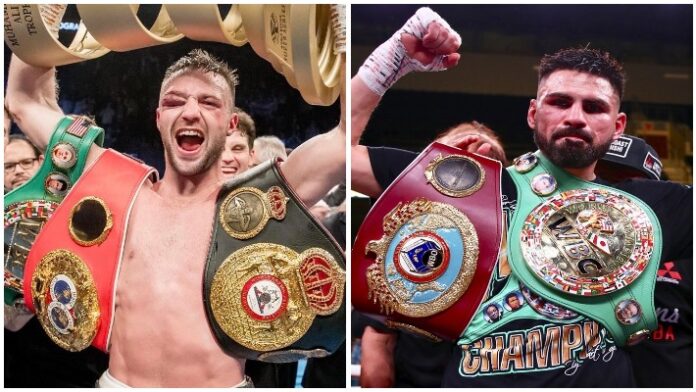 Josh Taylor is confident he will be able to knock out Jose Ramirez in a 140-pound championship unification bout but first, both men must make mandatory title defences.

Taylor must defend his IBF title against Thailand’s Apinun Khongsong. The 29-year-old was supposed to face off against the super-lightweight number one contender at the SSE Hydro in Glasgow, Scotland earlier this year but the bout was scrapped due to the ongoing coronavirus pandemic.

Ramirez is expected to make a mandated defence of his WBC title against long-time contender Viktor Postol, a fighter Taylor beat back in 2018. The bout has been postponed twice due to the lockdown but is likely to be rescheduled for later in the year.

If both men come through their upcoming fights it seems inevitable Taylor and Ramirez will face off in a super-lightweight undisputed fight. A fight the Scottish standout is very confident of winning. In an interview with BT Sport Taylor revealed he is confident of taking out Ramirez when they finally fight, he said.

“I think Ramirez is tailor-made for my style as well. He comes to fight and tries to put pressure on you, and I love that as well. I think I can knock Ramirez out and take all the belts. I’m really confident in doing that, to be honest.”

Do you agree with Josh Taylor? Will he be able to knock out Jose Ramirez to claim all four super-lightweight belts?