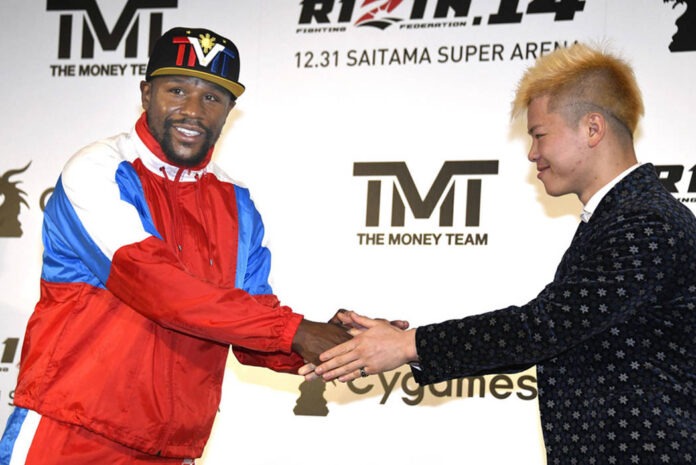 Tenshin Nasukawa will be Floyd Mayweather Jr.’s next challenger.

The kickboxing star and undefeated boxing legend will step into the cage for the RIZIN promotion. It’s set to go down from the Saitama Super Arena in Tokyo, Japan, on New Year’s Eve. Mayweather vs. Nasukawa will headline RIZIN 14. Speaking to media at his family’s Teppen gym in Northern Japan, Nasukawa spoke of his interactions with Mayweather.

Nasukawa sounds to be annoyed with “Money,” who he says he wants to kick (via ABS-CBN Sports):

“I can change the world with my fist,” Nasukawa said. “I sensed no aura about him. He says such provocative stuff I feel like kicking him. He is the best so I can’t let my guard down.

“I’m sure his punches are fast but I’m sure I can see them. I feel excited, although some days I still feel afraid. But when the day comes, I want to fight with confidence.”

Nasukawa and Mayweather will compete in a three-round exhibition bout that will not count on their combat sports records. Also, Nasukawa will not be able to use, arguably, his greatest weapon – his kicks. Instead, they’ll fight in a bout with only punches being allowed.

Perhaps Nasukawa could be the one to finally best Mayweather inside the ring. Whether he does or not, however, it won’t count on either man’s overall record.