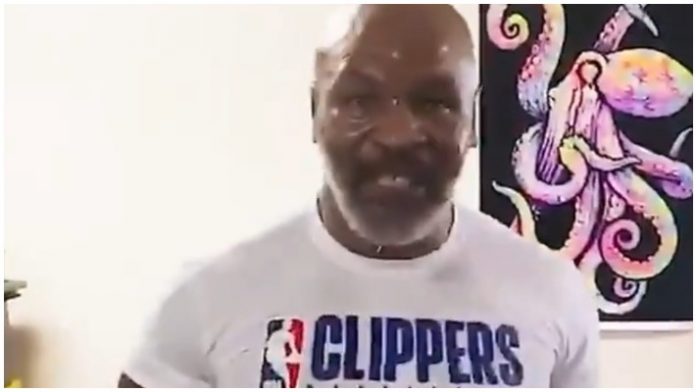 Heavyweight boxing legend Mike Tyson appears to have stepped up his training ahead of his surprise return to the sport. ‘Iron Mike’ sent fight fans into a frenzy when he announced he’ll be returning to the ring at 53 years old two weeks ago.

Tyson retired from the sport almost 15 years ago after suffering back-to-back knockout losses. Speaking on a live Instagram video with rapper T.I, Tyson revealed he has begun cardio, weight, and pad sessions with the end goal being to take part in some charity fights.

Mike Tyson Has Still Got It!

The former champion then got everyone on board with his comeback idea with one brief clip uploaded to social media. Tyson is seen smashing the pads and looking incredibly sharp for someone who’s been away from fighting for so long.

Long-time rival Evander Holyfield has added to the excitement by announcing he too will be coming out of retirement to fight again. The 57-year-old who beat ‘Iron Mike’ twice says he’ll be having some exhibition bouts to raise money for charity.

“The moment you’ve all been waiting for…. The Champ is back,” Holyfield wrote on social media. “I’d like to announce that I will be making a comeback to the ring.

“I will be fighting in exhibition matches for a great cause. I’m training to promote a charity that’s very close to me. Our #Unite4OurFight campaign aims to provide students the resources they need for emotional development and education.”

While he haven’t seen Holyfield back in training yet, we think it may be best if he avoids a trilogy fight against Tyson after watching his latest training montage. Tyson can be seen hammering pads on several different occasions with the ferocious power that made him famous – check the video out below.

Does this video make you excited to see Mike Tyson return to boxing?