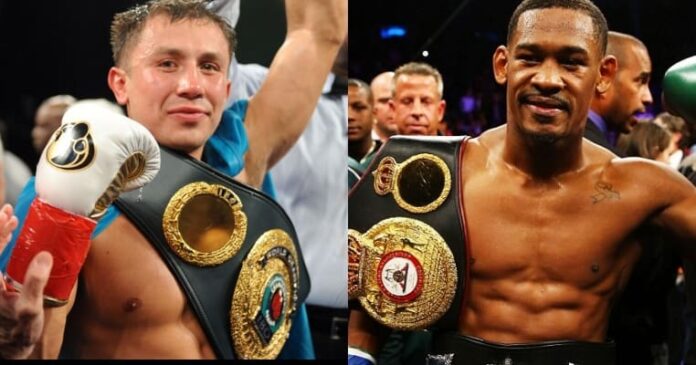 Middleweight destroyer and reigning IBO, IBF, WBC, and WBA champion Gennady “GGG” Golovkin continued his frightening knockout streak with a fifth round stoppage of IBF welterweight champion Kell Brook this past weekend (September 10, 2015) from The O2 Arena in London, England.

In the aftermath of the bout, Golovkin made it clear what he wants next: a bout against WBO 160-pound titleholder Billy Joe Saunders. By fighting Saunders, Golovkin hopes to capture the lone middleweight title that has avoided him up until this point.

Despite his wishes, however, Golovkin may have another fight on his hands as the WBA has ordered him to take on mandatory challenger Daniel Jacobs according to a report from Sherdog. The WBA has said that the two men must square off within 120 days. The sanctioning body also made it clear that the 30 day negotiation period has begun and if an agreement cannot be made, the fight will go to a purse bid.

Jacobs, the reigning WBA ‘regular’ middleweight champion, recently competed as well, stopping Sergio Mora in the seventh round of their September 9, 2016 bout. Jacobs currently holds a professional record of 32-1.

The bout undoubtedly makes sense given the fact that Jacobs is the ‘regular’ champion and Golovkin is the ‘super’ champion, although it may not happen in the near future. GGG appears to be solely focused on capturing ‘all of the belts’ as he’s so often stated, and after he attempts to do so, he’ll likely be gunning for a blockbuster showdown with Mexican superstar Saul “Canelo” Alvarez, which will hopefully take place in 2017.

Who would you like to see Golovkin meet next?