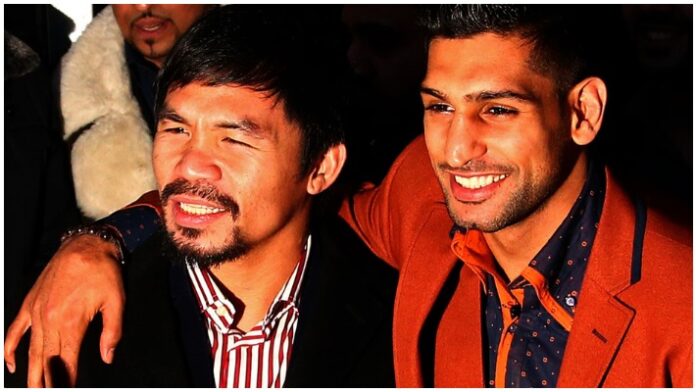 Amir Khan has spoken out to deny reports he was knocked unconscious by Manny Pacquiao during their infamous sparring sessions at the Wild Card gym. During a recent interview with Sky Sports Irish boxer, Dean Byrne said he’d heard Khan got came off worse during sparring with ‘Manny’.

“I didn’t see it myself,” Byrne said. “Khan was all over the place on many occasions and everybody at the gym knows it. I heard stories that he was asleep on the floor. I have heard that.

“Khan’s chin is just like that. He is a great fighter, a great athlete, a super boxer, his hand speed is so fast. But his chin? He hasn’t got a good chin. You can’t put muscles on your chin. Freddie wanted him to get in, get out, get in, get out. But Khan stays in the pocket for too long to please the crowd, then he comes unstuck because of his chin.”

Khan has now responded in a video statement to Boxing Scene saying he has never been dropped in sparring by Pacquiao or anyone else.

“We must have done 300 or 400 rounds of sparring in total – and never was I ever put down by him or hurt by him in any way. We had some great sparring sessions. He’s a southpaw, I’m an orthodox fighter. And Freddie Roach was there as well. With all of these comments people are making that I was put down, they are not true.

“I was never put to sleep or put down by Manny Pacquiao, which is quite ridiculous with some of the comments I’ve been reading. Look, no disrespect to Manny, he’s a great fighter, we had some very competitive sparring sessions – toe to toe we were. He would catch me with good shots and I would catch him with good shots.

“I have to thank Manny because he helped me get my confidence back. When I lost to Breidis Prescott in the UK, I then moved over to the Wild Card and Manny was one of the guys who helped me get my confidence back. It was just amazing to be in the ring with such a great legend at that time. At that time he was getting ready to fight Oscar De La Hoya.

Do you think Amir Khan has ever been dropped in sparring?