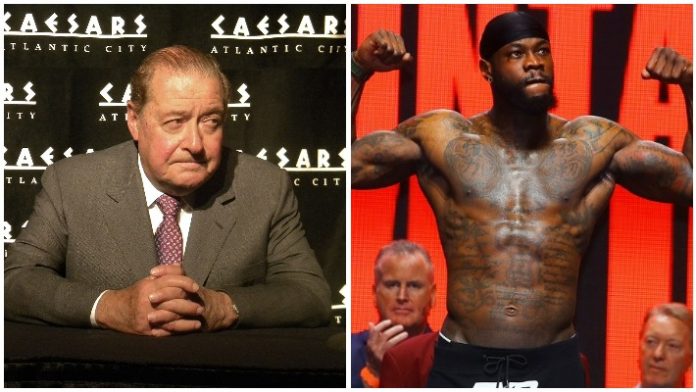 Top Rank CEO and co-promoter of Tyson Fury Bob Arum has denied reports Deontay Wilder is willing to step aside and allow ‘The Gypsy King’ to face Anthony Joshua if he is paid $10 million. Fury captured the WBC and Ring Magazine heavyweight title by beating Wilder in February. The Englishman dominated the highly anticipated rematch throughout seven rounds before team Wilder threw in the towel.

As written in the fight contract ‘The Bronze Bomber’ has a rematch clause that has now been activated. A trilogy fight between the heavyweight rivals was being discussed for July 18 before the ongoing global pandemic brought an end to those plans. The fight was believed to be still happening at a later date until reports emerged suggesting Fury may instead face his compatriot Joshua next.

In the last few days, it has been reported Wilder is now willing to give up his immediate rematch for the hefty sum of $10 million and a guaranteed shot at the winner of Fury vs Joshua. Speaking to Ringside Reporter Arum dismissed the reports and assured Team Wilder is still very interested in arranging a rematch for as soon as possible, he said.

“The Wilder people when they saw these stories made it known to us and MTK that Wilder was not amendable to step aside. That he wanted to fight Fury again and gain revenge. So these stories about step-aside were fantasies.”

The bout is now expected to happen later this year. Wilder seems willing to get it done as early as October although the months of November and December seem the most likely to host this heavyweight mega-fight.

“I’ve been informed by the Wilder people that the original October date was acceptable, and he could make a fight as early as that date. So certainly November, December would be a no-brainer,” Arum concluded. (Transcribed by Boxing Scene)

Do you think Bob Arum will be able to make Tyson Fury vs. Deontay Wilder III in 2020?