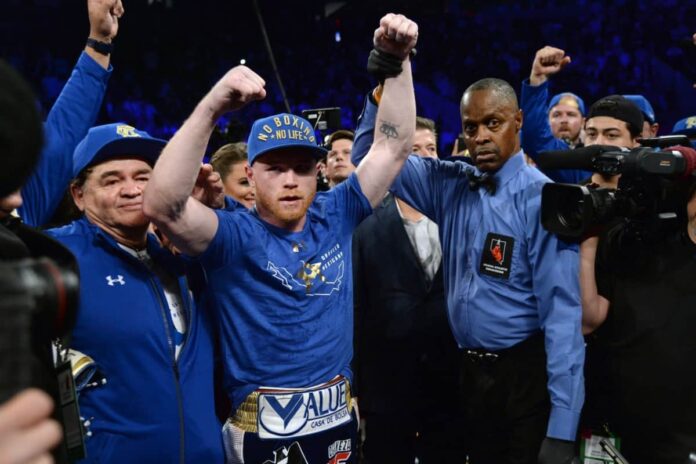 Canelo Alvarez will jump up to super middleweight to challenge for a new divisional title.

Last month (Sat. September 15, 2018) Canelo defeated Gennady Golovkin via majority decision to become the unified middleweight champion of the world. As promised, he will fight once more before the year’s end.

The Mexican star will make his Madison Square Garden debut on December 15th. He will take on Rocky Fielding (27-1, 15 KOs) for the super middleweight championship. Fielding won the title back in July via fifth-round TKO over Tyron Zeuge.

Canelo took to social media to make the news official:

“I’m very excited to announce my next fight. Next December 15th at the New York MSG,” Alvarez said. “Taking a big challenge. I will fight for the world title at 168 pounds versus Rocky Fielding, the current WBA champion!”

Alvarez had been eying a December 15th bout even before he fought GGG in September. The 28-year-old only suffered a bad cut during his fight with the knockout artist, but his doctor has said he’ll be fine to fight come December. Alvarez also has a big business decision to make.

His fight with GGG was the last of his contract with HBO. HBO recently announced that they will be leaving the boxing business after 45 years. Golden Boy Promotions’ Oscar De La Hoya had said following the GGG fight that HBO would get the first crack at negotiations to sign Canelo.

With news that HBO is leaving boxing behind, it should be interesting to see who, arguably, the biggest star in boxing signs with next.