Home Boxing News Chris Eubank Jr: I Know I Can Beat Canelo, I See His... 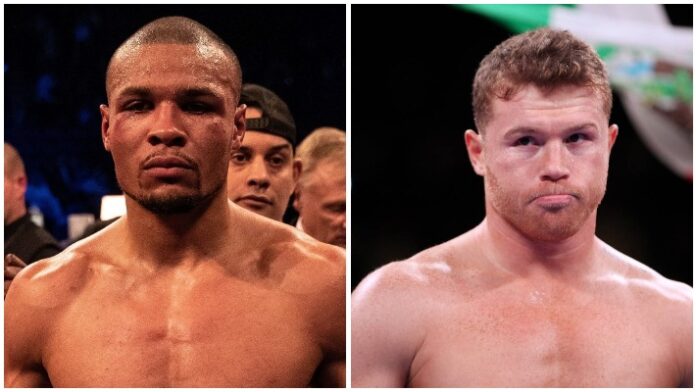 Middleweight contender Chris Eubank Jr has called for a fight against Saul ‘Canelo’ Alvarez. The Mexican still holds the WBA middleweight title despite fighting at light-heavyweight last time out. Eubank is the organization’s interim champion at 160lbs and believes he is the man who should face ‘Canelo’ next. Speaking to Sky Sports Eubank said he is the toughest opponent available for the Mexican superstar due to the fact he would enter the fight with a seek and destroy mentality.

“Canelo Alvarez, that’s the No 1 fight that I want right now,” Eubank Jr said. “I don’t think anyone on the planet would make a better opponent for him. Most guys are going in there to run and survive, I’m going in there to destroy.

“I know I can beat him, so that’s the fight I want. I definitely have got a strategy. I see the weaknesses. I see where he can be exposed. I’m not looking to survive, I’m taking the fight to him and I don’t think he’s ready for somebody like that.”

“Gennady Golovkin and Canelo Alvarez, two of the biggest names in boxing and they both have middleweight titles. Those are the guys I want. Those are the fights that I need at this stage of my career. I don’t want to take backward steps. It’s full steam ahead.”

Another option for Eubank is, of course, a rematch against long-time rival Billy Joe Saunders. ‘BJS’ handed Eubank his first career loss back in 2014 and the pair have been feuding ever since. Saunders currently holds a super-middleweight title and Eubank thinks their difference in weight may stop the fight from happening – at least for now.

“Saunders is ongoing,” Eubank said. “It is a fight that can, and probably will, happen again in the future. Everybody knows we don’t get along. We don’t like each other. I want the fight. The only issue is that I’m at middleweight and he’s at super middleweight.”

Do you want to see Chris Eubank Jr face off against Saul ‘Canelo’ Alvarez?