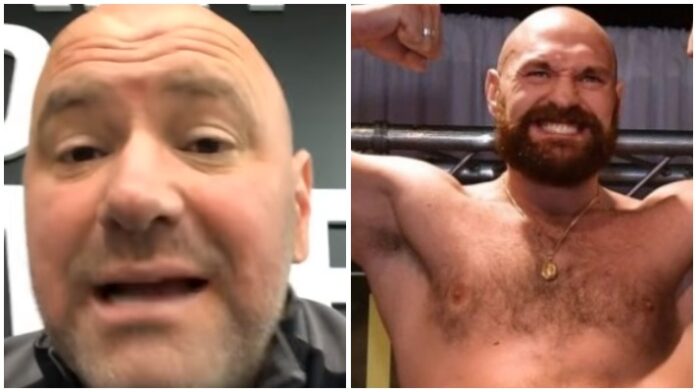 UFC president Dana White did not rule out the possibility of Tyson Fury competing in mixed martial arts — however, he is questioning the boxer’s decision.

Fury recently made headlines when he teased a potential MMA debut. The boxing lineal heavyweight champion would later declare that he even wanted potential fights with Stipe Miocic and Francis Ngannou.

While it might sound unrealistic, crazier things have happened in combat sports. That is why White believes it is certainly possible. But given how Fury could make even more money fighting in a talent-rich heavyweight division in boxing, the UFC head honcho pondered why the Briton would even want to enter the Octagon:

“Tyson Fury had a tough time in his last fight in a boxing match. Coming over to MMA is a whole ‘nother story,” White told TMZ recently. “… Listen, anything’s possible. If Tyson Fury wants to fight in MMA, I’ve got a ton of guys that would love to fight him.

“I just don’t know why. I can’t wrap my head around why. …He’s an incredible fighter. Promoted the right way, [he] could be a part of three or four of the biggest fights in heavyweight [boxing] history. Why come over here and get smashed when you could stay there? Tyson Fury, your time is now. You’re the man in boxing. You’re one of the top four guys in the world in boxing. Why even think of coming over here?”

White certainly has a point.

Fury recently made his WWE debut and fortunately came out unscathed. He is now expected to face WBC heavyweight champion Deontay Wilder in a rematch in February. Maybe he’ll start focusing on an MMA debut afterward?

Do you agree with White?