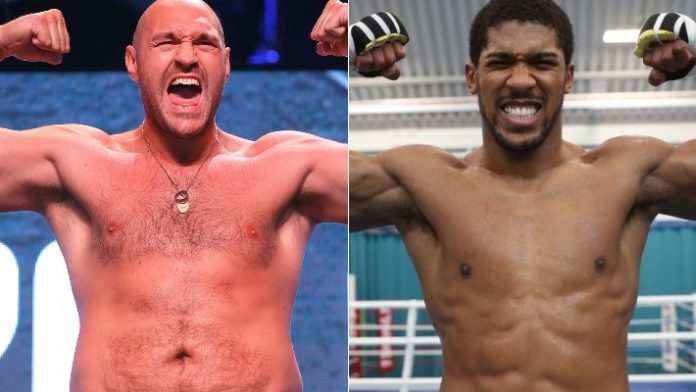 A bout between Tyson Fury and Anthony Joshua seemed to be in the distance as the two Heavyweight champions both have contractually obligated title defences to complete first, however, according to several reports discussions have begun for Saudi Arabia to home a match between the two in December.

Taking to twitter the Athletic’s Mike Coppinger shared the news.

“Long way away. Wilder & Kubrat Pulev need to separately agree to step aside since they have contractual rights to bouts with Fury and Joshua, respectively. Then, sides for Fury and A.J., would need to strike a deal. Pandemic looms over this all, of course. @MarkKriegel First”

Deontay Wilder and Kubrat Pulev both have contractually obligated rights to their respective matchups, however, as Coppinger reports a deal could be struck to let Fury and Joshua face off first. It is unclear whether either fighter would be interested in making a deal at this time.

Fury vs Joshua is the biggest match that can be made in heavyweight boxing today. The two Englishmen are coming off title acquiring victories.

Fury defeating Deontay Wilder by 7th round TKO in there rematch in February. The pair fought to a draw in their first bout, the second was a one-sided affair that saw Fury come forward and dominate Wilder until his corner decided to throw in the towel. This victory saw Fury gain the WBC heavyweight championship belt to add to his The Ring and lineal heavyweight titles.

In 2019 Joshua reclaimed his championships in a decision winning rematch after being knocked out by Andy Ruiz in a massive upset loss. Joshua claimed back his multiple championship belts, IBF, WBO, WBA (Super), and IBO.

Not only would the two names bring a massive crowd, seeing all the championship belts are unified would be a spectacle for the ages.

Do you think we see Tyson Fury and Anthony Joshua fight in December?