Home Boxing News Dmitry Bivol Would Move Down To 168lbs To Fight Callum Smith Or... 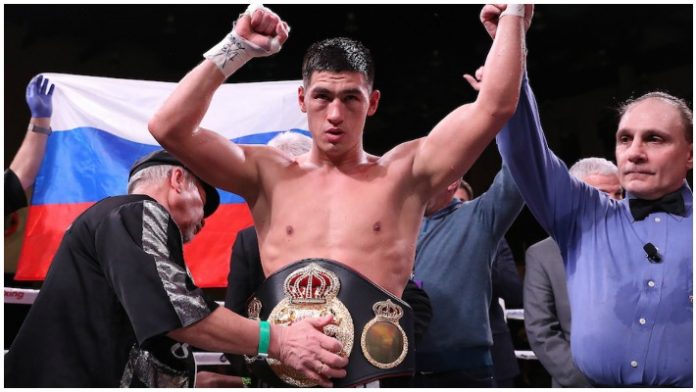 Light-heavyweight champion Dmitry Bivol says he is willing to drop down to super-middleweight in order to make a fight with Callum Smith or Saul ‘Canelo’ Alvarez. The unbeaten 175-pound WBA titlist admits he’d prefer to stick to his current weight class and fight Artur Beterbiev in a highly-anticipated unification bout.

Speaking to Chris Lloyd for the most recent episode of “The Lockdown Tapes,” Matchroom Boxing’s podcast Bivol discussed the fight would motivate him to cut the extra seven pounds of weight and compete at super-middleweight.

“I think it could be a great fight for Britain fans and for Russian fans,” Bivol said of facing England’s Smith. “For boxing, it’s a good fight because he’s a champion at 168 pounds, and I am the champion at 175. I would like to fight against the best fighters in the world, and he’s now one of these guys who’s the best.”

The 29-year-old while willing to move down thinks the fight makes sense at light-heavyweight. Smith at 6-feet-3 is huge for his current division and a move up in weight seems an inevitability for ‘Mundo’.

Bivol already holds a win over Smith from his amateur days…

“It was in Hungary,” Bivol said. “To be honest, I don’t remember this fight at all because when we fight each other, for me it was just a guy from Great Britain, just a tall guy who has good skills. But I have to beat him. Only like that, my memories.”

If the Russian knockout artist is to move down in weight his preference would be to fight ‘Canelo’, although he realises he is just one of many fighters queuing up to face the Mexican superstar.

“Of course, many people wanna fight Canelo,” Bivol said, “because many people see that he is just a man, just a boxer. Yeah, of course he is a good boxer. But you can earn money with him, you can make a good name for you if you [beat] him. It’s a good opportunity to show your boxing skills to the whole world, because he has the biggest fan base.” (Transcribed by Boxing Scene)

Do you think Dmitry Bivol could beat Callum Smith or Saul ‘Canelo’ Alvarez?