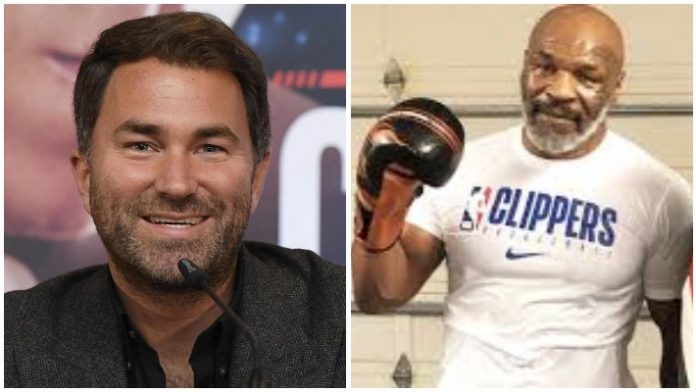 Leading boxing promoter Eddie Hearn of Matchroom Sports has ruled out his potential involvement in the return of Mike Tyson. The former heavyweight champion announced a couple of weeks ago he is in training with the hopes of securing a few exhibition fights. ‘Iron Mike’ has since posted various training videos which show he still has serious power in his hands at 53 years old.

Speaking to Sky Sports Hearn said despite being involved in events such as KSI vs. Logan Paul, he is not interested in promoting Tyson’s return bout due to the amount of “stick” he would receive for doing so, he said.

“We all know my head can be turned for a few quid! You saw my KSI vs Logan Paul fight which I got stick for, but it was a roaring success and I really enjoyed it. It taught me a lot. Imagine if I said: ‘Mike Tyson is returning to the ring and I will promote him!’ The stick I’d get would be unbelievable. It’s not something I’m looking to do.

On top of not wanting to be involved Hearn also expressed doubts Tyson would be able to compete at any serious level. Nonetheless he is happy to see the former champ happy and back in tremendous shape.

“I expect him to come back in some sort of exhibition, or something like that. Is that good or enjoyable? I suppose it’s intriguing. Tyson looked fantastic on the pads but he’s 53. Look at his last fight against Kevin McBride. He won’t be able to compete at [a high level]. It’s good to see him training. He’s in great shape. If it keeps him happy then why not keep training? I wouldn’t like to see him fight in the ring professionally.” (Transcribed by Boxing Scene)

Do you think Eddie Hearn would actually turn down the chance to promote a Mike Tyson comeback fight?