Home Boxing News Eddie Hearn Provides Update On If Canelo Will Face One Of His... 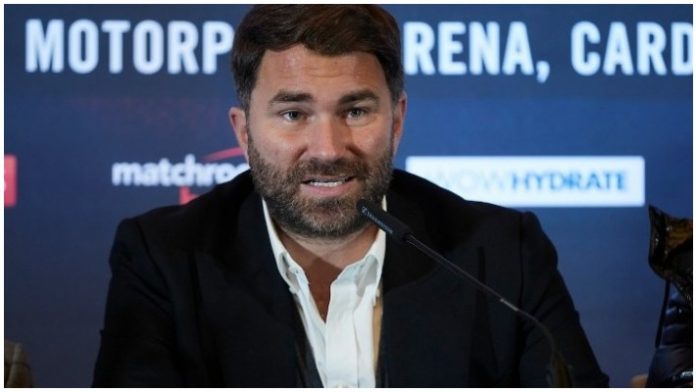 Eddie Hearn of Matchroom Boxing has provided an update on which of his long list of fighters are currently in the running to face Saul ‘Canelo’ Alvarez on September 12.

The Mexican superstar was originally set to face Billy Joe Saunders in May before the coronavirus pandemic scuppered those plans. Saunders is no longer being considered to face ‘Canelo’ in September as the finances won’t allow it. With no income being generated from ticket sales, Saunders rejected a greatly reduced offer to the one he had previously accepted. Thus begin the hunt for a cheap alternative opponent and Hearn was more than wiliing to offer up some of his guys.

“I put forward to Golden Boy three or four weeks ago Dmitry Bivol (the WBA light-heavyweight champion), Demetrius Andrade (the WBO middleweight champion), Callum Smith and John Ryder and I said this is all the money they want,” Hearn said.

“The only one there has been a discussion about is Callum Smith. So far.

“I saw Bernard Hopkins’s comments. There have been no discussions about John Ryder at all. I do believe he is in the mix. But we haven’t had an offer, we have not discussed money. We have discussed money on Callum Smith and we are not quite where we need to be.

“We are not a million miles away but it is seven weeks this coming Saturday. Luckily, Callum Smith is ready to go, John Ryder s ready to go.

“You don’t have to sell tickets anymore, but you still want a lot of notice for a fight like that.”

Hearn says he doubts streaming service DAZN will approve some of the opponents who are currently being linked to ‘Canelo’. He is instead pushing for either John Ryder or Callum Smith to get the call.

“John Ryder is chomping at the bit, so is Callum but they are in different positions,” Hearn said. “Callum had the WBA super championship, he is The Ring champion, so he has a lot on the line.

“I believe there are other fighters in the mix, Derevianchenko, Charlo. I have seen them put in Lemieux and Quigley, I can’t see in a million years DAZN approving those fights.

“I don’t know Canelo personally but I do get a feeling that he wants to face the champion and I think is he had his choice, he would choose Callum Smith, if money allows it.” (Transcribed by Boxing Scene)

Do you want to see any Eddie Hearn fighters face off against ‘Canelo’ on September 12?