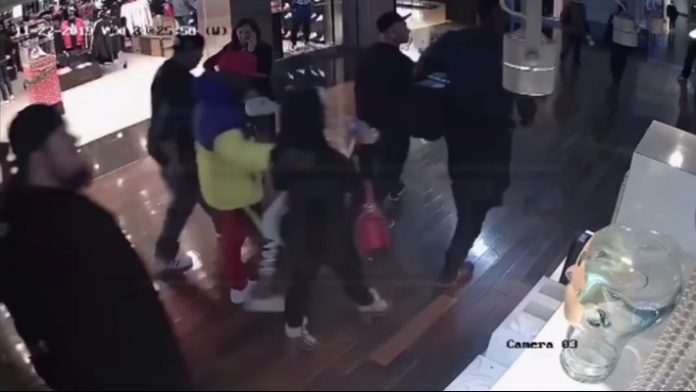 One of Floyd Mayweather’s entourage members recently got mixed up in a physical confrontation during the Money Team’s visit to a mall in Las Vegas.

TMZ reports that Mayweather and company were leaving the House Of Hoops store on Thanksgiving eve when a worker at a kiosk approached Mayweather for a photo. The employee, who is Juan Calderon, told TMZ he was trying to get a photo for a co-worker who was too shy to ask himself. However, Mayweather rejected the photo request.

That team member can be seen in mall camera footage wearing a TMT shirt, throwing a couple of punches at Calderon, and landing 3-5 of them. Calderon said Mayweather was right there as the attack happened. Calderon went to the hospital for a CT scan, and no brain injuries were found. He also filed a police report, and local law enforcement confirmed they responded to a “simple battery incident” at the mall on Wednesday around 9:30 p.m.

Mayweather sources told TMZ that Calderon was antagonizing “Money,” and was looking for a fight, and likely a lawsuit. You be the judge, and check out the footage below.

What do you think about one of Mayweather’s crew members punching the fan after having his photo request rejected?