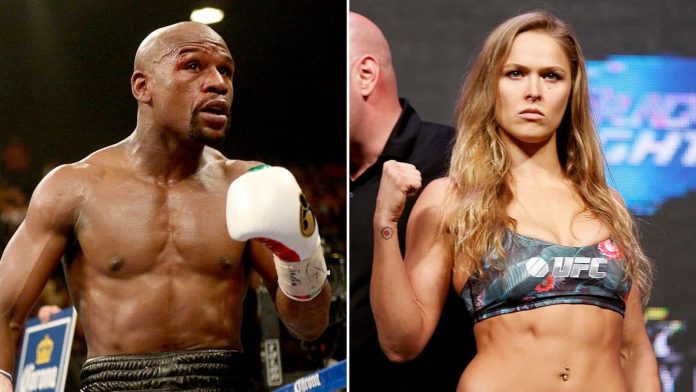 The world’s of MMA (mixed martial arts) and boxing often draw speculative comparisons in the media and among fans, but an odd rivalry between the two sport’s most dominant stars has emerged clearer than any other in recent times. We’re talking about Floyd Mayweather, multiple weight boxing legend, and UFC women’s bantamweight champion Ronda Rousey. ‘Rowdy’ stated in the past that she could hang with ‘Money’ in both ring and octagon combat, and Mayweather responded that he’d never heard of her before.

From there things just escalated, as Rousey took an obvious snipe at Mayweather at the recent ESPY awards, picking on the fact he’d been arrested for domestic violence and asking how it felt getting beat by a woman. The unbeaten women’s 135-pound champ let her fists do the talking at UFC 190, dispatching of formerly undefeated Bethe Correia in just 34 seconds. Mayweather has obviously caught wind of the incredible victory, and downplays it the only way he knows; throwing money in to the mix during ESPN’s SportsCenter, as transcribed by MMAFighting:

Rumours of a charity boxing match between the two have spread like wildfire over recent weeks, but truly what is there to gain in this situation? It’s largely a media fishing trip, and the reality is that these two would never actually fight.

To the point ‘Money’ makes about his payroll, it’s highly doubtful that any fighter from the current crop of champions will fight long enough to see Mayweather level dosh, as the sport is simply too short in the tooth right now.

That said, a boxing crossover might be the way forward for the UFC breaking PPV (pay-per-view) buy records, and no, James Toney does not count.