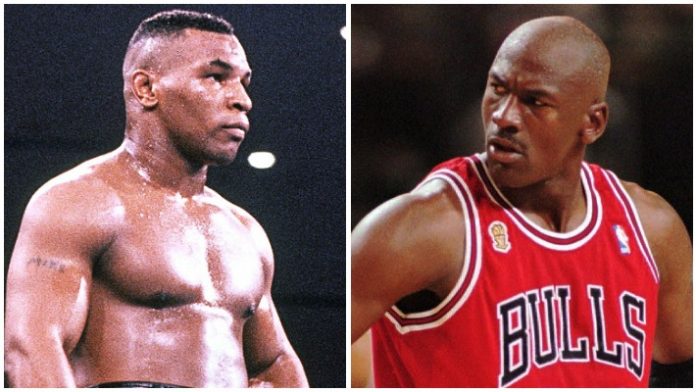 Heavyweight legend Mike Tyson once tried to beat up Michael Jordan at a dinner party according to the boxer’s former manager Rory Holloway who wrote about the encounter in his memoir. The run-in supposedly took place in 1998 when both Tyson and Jordan were attendees at Hall of Fame Bears defensive end Richard Dent’s 28th birthday party in Chicago.

Bears coach Mike Ditka, promoter Don King and Tyson’s manager Holloway were all in attendance at the event. ‘Iron Mike’ who was in his boxing prime was also in the midst of a bitter divorce with his now ex-wife Robin Givens. Jordan is believed to have previously dated Givens and this is something that didn’t sit well with Tyson – especially after a few too many drinks, Holloway recounted.

“Mike Tyson’s sitting there with his drink of choice, a Long Island Tea, and when he drinks his real feelings come out.

“I’m telling the server to water his drinks down ‘cause I see where this is going. Mike stares across the table at Michael Jordan. He says, ‘Hey man, you think I’m stupid? I know you f*cked with my b*tch.’

“Jordan looks like he just seen a ghost. ‘I know you messed with her,’ Mike says. ‘You can tell me.’

“Jordan, it’s obvious he just wants to get up and run. He wants no part of this. Mike turns to Ditka. ‘Man, you think somebody scared of you, all that racist sh*t you been talking?’ He says to Dent, ‘Y’all scared of this damn white man, Richard? He ain’t nobody. You gonna let him talk that way?’

“It was a circus, for real, that night. Don King trying to change the subject. Me and John trying to hold Mike down. Mike telling everyone he’s going to bust Jordan’s ass. Jordan’s dressed sharp as always and he can’t get out of there fast enough.” (Transcribed by Boxing Scene)

Do you believe Mike Tyson actually tried to beat up Michael Jordan?