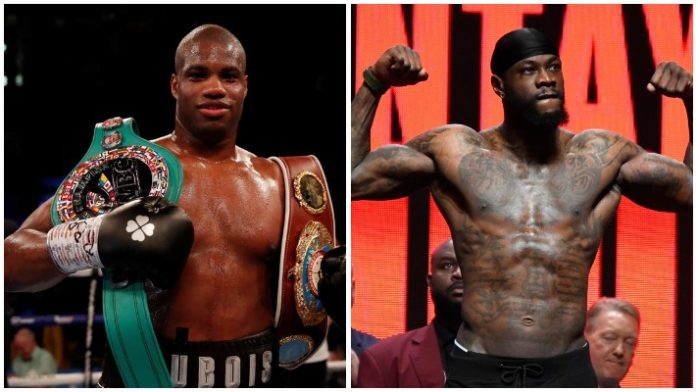 Hall of Fame promoter Frank Warren is planning to match heavyweight prospect Daniel Dubois against Deotnay Wilder in the near future.

Warren’s heavyweight charge must first get by Olympian Joe Joyce. The British duo were scheduled to face off at the O2 Arena in London, England on April 11. However, the ongoing coronavirus pandemic meant the show was pushed back until July 11 which now also seems unlikely to go ahead.

Speaking on the Queensberry Promotions Lockdown Lockdown show Warren revealed if Dubois gets by Joyce he hopes to make a fight with former WBC champion Wilder, he said. “If Daniel comes through his fight with Joyce… then yes, by the end of the year yes.”

Wilder was last seen in action while losing his title to ‘The Gypsy King’ earlier this year. The two top tier heavyweights met in a highly anticipated rematch on February 22 in Las Vegas, Nevada. Fury dominated the fight from the start and stopped Wilder inside seven rounds. A trilogy fight is currently in the pipeline but there have also been talks about an undisputed fight between Fury and Anthony Joshua.

“Tyson has shown how beatable Wilder is,” Warren said.” “Once their rematch is out the way, I’d have no problem matching Daniel with Deontay. Daniel’s big and powerful and everyone knows he can punch, too. But he’s a good boxer. I’ve said before that he has a Larry Holmes-like jab and he works the body as well as any heavyweight on earth.

“I’ve been telling people how good Daniel is and once the world starts going back to normal, I’ll have no doubt he’ll show you. Daniel is the best Heavyweight prospect on Planet Earth and he’ll have far too much for Deontay Wilder. I truly believe that.” (Transcribed by BoxingNews24)

Is it too early to think about matching Daniel Dubois against Deontay Wilder?