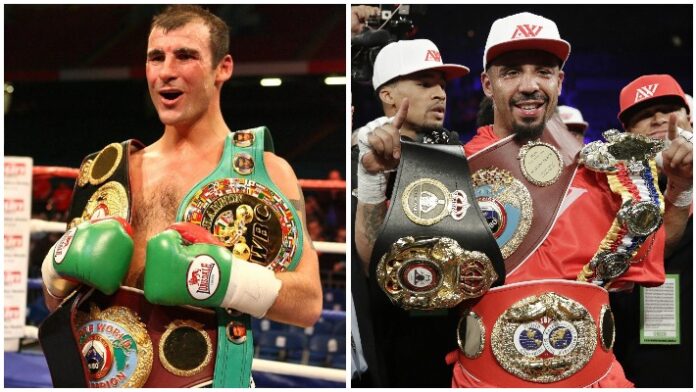 Former unified super-middleweight world champion Joe Calzaghe is confident he would have beat fellow 168lb great Andre Ward if they had ever fought. Calzaghe retired from boxing in 2008 after dominating Roy Jones Jr over 12 rounds. ‘The Pride of Wales’ walked away from the sport with a perfect, winning all 46 of his fights and stopping 32 of his opponents.

‘Super Joe’ holds high-profile wins over the likes of Chris Eubank, Jeff Lacy, Sakio Bika, Mikkel Kessler, and Bernand Hopkins. He is viewed by many as the best British fighter of all-time and one of the best to ever compete in the super-middleweight division.

Once Calzaghe left the sport Ward replaced him as the best super-middleweight in boxing. The Olympic gold medallist won the Super Six tournament and cleaned out the division before moving up to light-heavyweight where he enjoyed more success. Ward retired from boxing in 2017 with a perfect 32 – 0 record, 16 of his wins came by knockout.

Speaking to British Boxers TV Calzaghe said he’d have beaten Ward although he admits it would of went the distance and likely have been close on the judges’ scorecards.

“Andre Ward is a very clever fighter, it’d be quite cagey. I’d win the fight, I think it may be a bit like the fight with Hopkins in some rounds. It’s one of them fights, I think I would have beat him on points but whether it would have been a great fight to watch – I’m not too sure.” (Transcribed by Boxing Scene)

Do you think Joe Calzaghe would have beat Andre Ward if they fought?