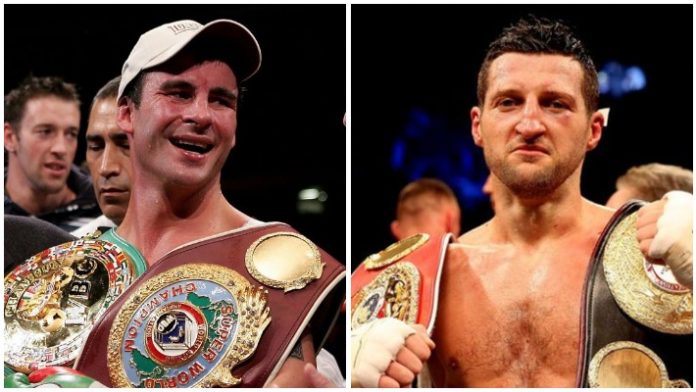 Joe Calzaghe has laughed off the idea he’ll come out of retirement after being called out by long-time rival Carl Froch.

Last week Froch said he was willing to end his retirement to fight Calzaghe who retired undefeated in 2008. Speaking on the latest episode of the ‘Froch on Fighting’ Podcast, he explained why he’s calling out the Welshman after all this time.

“Eddie Hearn sends me a message saying, ‘I’m doing some virtual press conferences, I’m thinking about getting you and Calzaghe on. I thought, ‘He’s probably not gonna get Calzaghe on, he probably won’t fancy it.’ I said to him, ‘Forget the virtual one, we’ll do the press conference, but if we can get him out of retirement, I fancy a bit of that.’

“I’ve always said I’ll come out of retirement for the right dance partner. Obviously I’m not gonna jump in there with a current world champion who’s been active, but someone like Joe Calzaghe, I mean, I’m not being funny.

“I don’t wanna be horrible or disrespectful in any way, but it’s gonna sound like I am, even though I’m not, but have you seen the state of him? Have you seen the size of his head? I don’t know why it’s swollen up so badly. He looks like he’s got high blood pressure. He looks a bit of a mess.

“So if he agreed to give me a fight, to come out of retirement, because of my cheek, and because of the way I’m speaking about him, then I’d definitely fancy a bit of that. But he ain’t gonna wanna come out because he knows he’d get absolutely flattened, because I’m in good shape.”

Speaking to TalkSport Calzaghe dismissed the call out and found the whole situation quite funny. He also stated in his prime he would have wiped the floor with Froch, he said.

“It’s mad, I’m still living in his head after all these years. I’ve done everything you can achieve in boxing. I know what would have happened and I don’t take much notice of what he says. I’m 48 and I’ve been retired 10 years, I’m happy with my career When I was at my peak I’d have been too fast and too sharp for him. I think I’d have beaten any super-middleweight, maybe not Roy Jones Jr at his peak.”

Who would have won if Joe Calzaghe and Carl Froch fought in their primes?