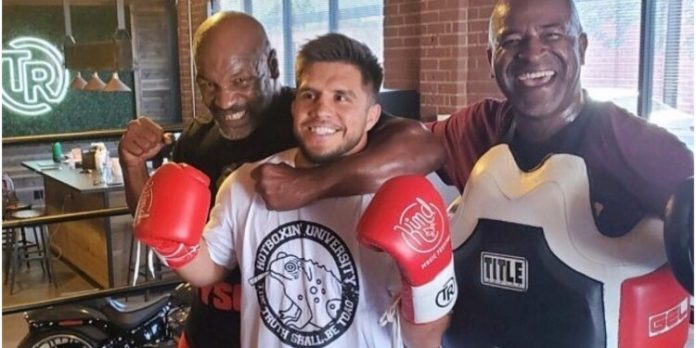 In a clip posted to Cejudo’s Instagram, The former heavyweight boxing champion of the world can be seen teaching the former Olympian how he throws a left hook to the body.

Henry (Triple C) Cejudo has voiced his desire to box since retiring from MMA in May, Setting his sights on a matchup with boxing prodigy Ryan Garcia.

Taking to Instagram live Garcia seemed confused by the matchup but also willing to participate.

“You want me to fight Henry Cejudo? What credit would I get when I haven’t even done what I want in boxing and Henry Cejudo wants to fight me. It could be only for one reason. Clout. It has to be for clout I mean, I can’t think of any other reason Henry Cejudo would want to fight.”

“I know what I can do to him, I know his an MMA fighter I’m a boxer be crazy to think he could beat me but if the people want to see it let’s do it”

After retiring from the UFC a two-division champion Cejudo said the only two matchups that could bring him back to fighting would be the boxing match with Garcia or a title fight with UFC featherweight champion Alexander Volkanovski.

Tyson himself has recently announced he would like to exit retirement and enter the ring again. Most recently turning down a multiple million-dollar offer to face former UFC fighter Wanderlei Silva in bare-knuckle boxing.

Iron Mike declined this offer as he would like to return to a traditional boxing bout and is not interested in competing for bare-knuckle.

Right now neither athlete has a bout signed, however, Tyson aims to return sometime in 2020.