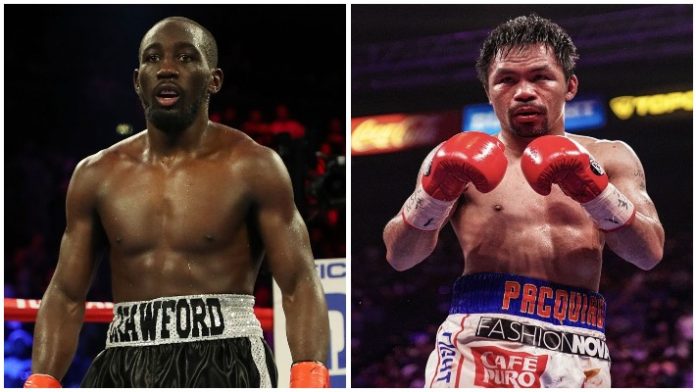 WBO welterweight champion Terence Crawford is hopeful that he will face off against WBA titleholder Manny Pacquiao next. Top Rank’s CEO Bob Arum, who promotes Crawford previously hinted at a potential Pacquiao unification fight for Crawford.

Speaking to Brian Custer on The Last Stand Podcast Crawford revealed he is currently in talks to fight Filipino superstar next and he is hopeful over getting the match-up over the line, he said.

“My next fight should be Pacquiao, we’re in talks with Team Pacquiao and I’ve been hoping that fight can get made, but anything after that I really can’t say because I’m only looking forward to the next fight, so if we can get that fight secure and signed then hopefully that can be our next fight

If he is unable to secure the biggest fight of his career against Pacquiao, Crawford says he’s ready to take on the biggest and best fighters at 147lbs.

“Sky the limit for me right now, I’m looking for all the big opportunities and all the champions.  I’m gunning for all of them,” Crawford said.

A huge problem can be found in the fact that the majority of top welterweight fighters are currently signed to PBC including Pacquiao, Errol Spence, Keith Thurman, Yordenis Ugas, Shawn Porter, Danny Garcia, and several others. This is a problem that is very apparent to Crawford who understands why PBC fighters are ducking him.

“Once it came to a point where it was some of their big fighters, they didn’t want to put them in the ring with me because they didn’t want to have Top Rank have the edge over their head where one of their fighters took out one of their top welterweights fighters.  So in a sense they (PBC) just fight each other, lets just take each other out, and see what he does in the meantime and we’ll go from there,” Crawford said. (Transcribed by Boxing Scene)

Do you want to see Terence Crawford face off against Manny Pacquiao next?