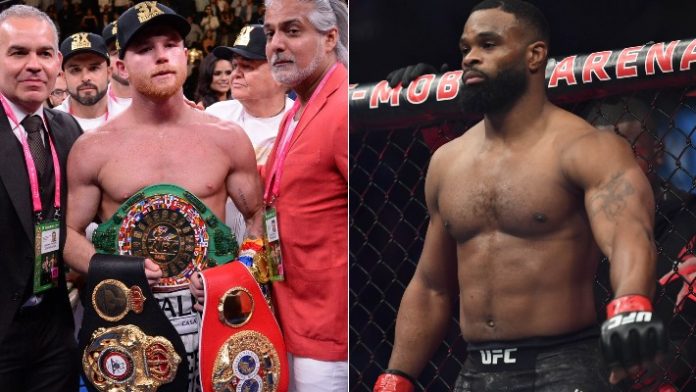 Tyron Woodley isn’t giving up on his campaign for a boxing match with multi-weight champion Canelo Alvarez. Recently, the former 170-pound UFC champion called out Alvarez during his TMZ show.

Now, Woodley has taken to Twitter to call out the Mexican star directly, claiming he’ll put him down if he connects, and plans on shocking the world.

When discussing his boxing aspirations with TMZ, Woodley explained he doesn’t want to box just anybody, he wants to go right after the number one name in the sport.

“I still can box right now,” Woodley said. “I want Canelo. I don’t want to go in there and fight ‘Boo Boo the Fool’ because if he land a couple shots off on you then everybody going to be like, ‘Oh, Tyron got touched up by this dude, and he ain’t even a .500 fighter.’ If you go in there and risk it all and let it hang, I want the No. 1 guy.”

Although Woodley is a mixed martial artist, he started off training in boxing before venturing into the world of MMA when he was 23-years-old.

“All I wanted to do was box when I came up,” Woodley said. “I just started MMA at 23, so I felt I was a little old to start boxing at that age. But since I was a kid, that was the only sport I’ve ever wanted to do. So most of my training is boxing training.”

As for how a fight with Canelo would go down, Woodley noted he’s not looking to go the distance with Alvarez. He wants to connect with a big shot and showcase the one-punch knockout power that has been the downfall of so many others he has faced inside the cage.

“No. 1, I’m not going to sit there and try to win 12 rounds, let’s be real,” Woodley said. “His defense is crazy. He’ll slip an uppercut and make you look real stupid,so I’m throwing all unorthodox. I’m trying to knock him out.

“If I land, he going down, let’s not even play. It don’t matter how many boxing and fights you got and how many MMA stuff, If I hit Canelo with everything, throw some (expletive) on the punch, it’s a wrap.

What do you think about Woodley wanting to box Alvarez?