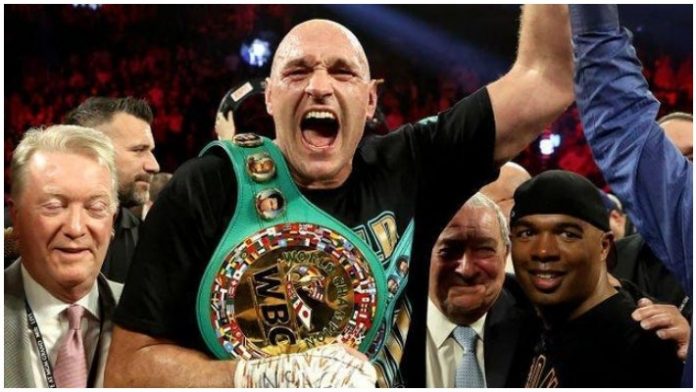 Heavyweight champion Tyson Fury says he won’t be dictated to by the WBC and is willing to drop the belt if they try to force him into a fight with mandatory challenger Dillian Whyte. Whyte has been the WBC number one contender at heavyweight for almost three years and has been vocal about his desire for a title shot sooner rather than later. As of right now he should have had his chance by no later than 2021.

Current WBC heavyweight champ Fury is booked to face Deontay Wilder in a trilogy fight later this year. ‘The Gypsy King’ has also agreed on terms to face Anthony Joshua in an all-English undisputed fight, the pair are expected to face off twice in 2021.

Speaking on Queensberry’s Lockdown Lockdown show Fury revealed he won’t be fighting Whyte and is prepared to surrender his WBC if the organization tries to dictate who he’ll be facing in the last few fights of his career, he said.

“It won’t be a belt or an organisation dictating to anybody because no-one has ever dictated to the champion. These low profile fighters don’t mean anything to me, I’m after the biggest fights available. I’m a proud WBC champion but at the end of the day I’m the lineal heavyweight champion of the world which trumps everything. Belts are just pieces of leather with pieces of metal on them and they don’t mean anything to me.

“Dillian Whyte is a one-hit wonder and he’s been knocked out by AJ already. The answer to Dillian Whyte is, wait in the queue and your time will come when it comes; I’m not really interested in you. If he thinks he’s going to call me a few names on social media and I’m going to turn down a $100 million pay day then he’s got a long wait.” (Transcribed by Boxing Scene)

Do you think the WBC will try to force a fight between Tyson Fury and Dillian Whyte?