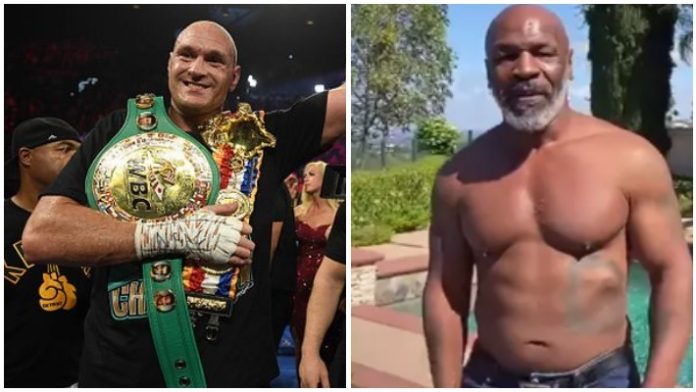 Current heavyweight king Tyson Fury has explained why he is supporting boxing legend Mike Tyson who is making his comeback to the sport at 53 years old. ‘Iron Mike’ announced he was training hard with the intention of having some exhibition fights a few weeks ago. Since then he has posted various training clips and he is looking in tremendous shape. A whole host of fighters are lining up for a shot at the former champ including long-time foe Evander Holyfield and MMA fighter Tito Ortiz.

Speaking to IFL TV ‘The Gypsy King’ offered his full support to Tyson, saying if he wants to train and fight then let him be.

“I know what it’s like to suffer with mental health problems and then give myself a massive goal to achieve and I know what it’s like to set about achieving it. Mike Tyson is 53 years old and Evander Holyfield is nearly 60, if they want to do this this is their choice. Let them do it. We could say, ‘oh no, don’t let them do it’. But at the end of the day they are grown men. They know the risks, they know their responsibility. I say if they can pass medicals and pass all the brain scans and they are healthy and fit to box, then let them box.

“George Foreman was 44 years old when he won the world championship, how can we consider having an older heavyweight champion if they are not giving them the opportunity to? ‘If they are fighting exhibitions then it’s between them isn’t it and people their own age. Shannon Briggs is a bit younger than them and whoever else.

“But I wouldn’t like to see Mike fighting one of the top heavyweights because obviously 53 years old versus 35 or 30 [years old] it’s just not fair. ‘But to see him fight someone his own age like an old timer as well, fantastic, I’d love to see it. ‘If he’s definitely serious about it I’ll buy a pay per view, for sure. There’s one buy right here.” (Transcribed by Boxing Scene)

Do you agree with Tyson Fury? Is it OK for Mike Tyson to return to fighting at 53?