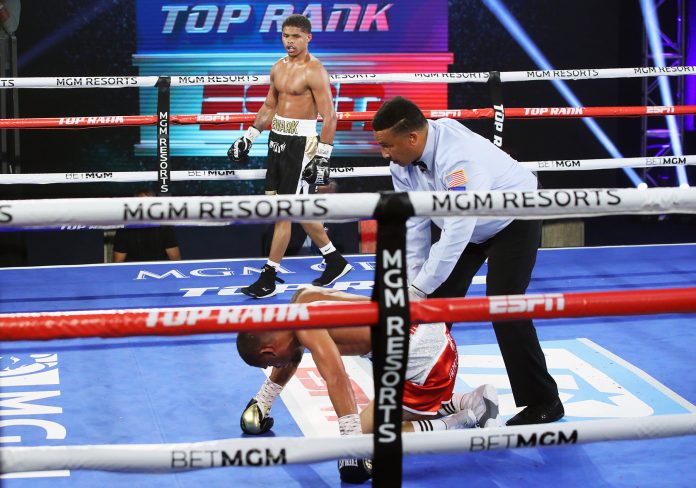 From start to finish, Shakur Stevenson dominated his super featherweight clash with a game but outmatched Felix Caraballo. Stevenson controlled proceedings, firing off crisp, accurate shots throughout the bout until he finally stopped Caraballo with a vicious body shot in the sixth round. The videos below capture the moment that saw Caraballo’s night come to an end.

The win moves Stevenson’s record to 14-0, 8 KO, and it will be interesting now to see if the 22-year-old returns to 126 or stays at 130. Before the coronavirus pandemic struck, Stevenson was scheduled to face Colombia’s Miguel Marriaga in what would have been the first defense of his WBO featherweight strap.

A fight against Marriaga may not be enough to tempt Stevenson back down to 126. Still, he has said that he would be open to title unification bouts against either IBF Champion Josh Warrington or WBC Champion. Gary Russell Jr.

It appears, for now, the world really is Stevenson’s oyster, and there is no shortage of exciting matchups on offer for the ‘Brick City’ native.

Who do think Stevenson should face next?