Home Boxing News Wilder vs. Fury Pay-Per-View Estimates Are In 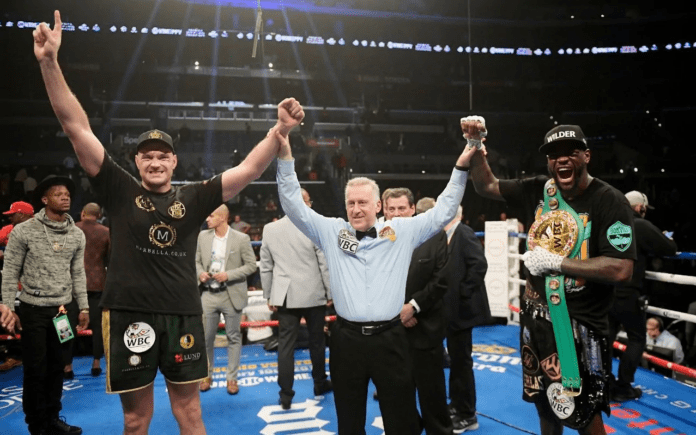 Wilder vs. Fury pay-per-view estimates are in.

It’s safe to say the fight was a big success based on the numbers. The awaited heavyweight title fight from Staples Center last Saturday night (December 1, 2018) was a classic, back-and-forth affair filled with a ton of action and controversy. It was declared a split-decision draw, but most thought Fury very clearly did enough to win.

Wilder did knock him down twice. The second knockdown was a vicious combination that Fury amazingly got up from and continued fighting. The fight was an amazing battle that gave the heavyweight division a huge jolt of life. And that has proven true in the pay-per-view estimates.

According to Ring Magazine’s Mike Coppinger, Wilder vs. Fury is tracking at over 300,000 PPV buys. The break-even point was 250,000 so it’s already a success in early pay TV estimates as a result:

Coppinger then updated the figure with a more precise estimate:

Pay-per-view has been a dwindling model for boxing recently, with only huge names like Floyd Mayweather performing well. It was a big success for Wilder vs. Fury to do the numbers it supposedly has because of that.

Coppinger put Wilder vs. Fury’s buyrate in context by comparing it that of other boxing pay-per-views doing far less:

Wilder vs. Fury found success on pay-per-view when many other fights could not. It’s no small feat considering only the UFC has really milked PPV for major cash recently. The model is considered outdated as more and more streaming services come out.

But this fight was a success on the supposedly outdated format. Because of it, boxing could be making a comeback on PPV. Will Fury vs. Wilder open up a new competition with the UFC?