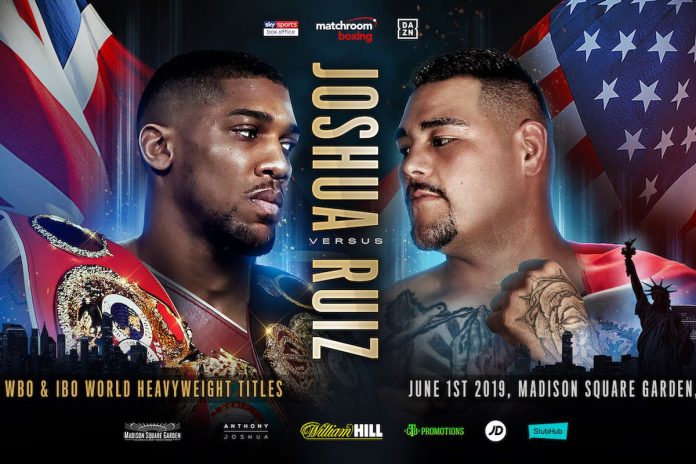 Andy Ruiz Jr. plans on shocking the world when he challenges Anthony Joshua for the heavyweight titles on June 1 at New York’s Madison Square Garden.

Ruiz Jr. is stepping in on short notice after Joshua’s former opponent Jarrell Miller was pulled from the event after failing three drug tests last month.

Many are already viewing the fight as a foregone conclusion, especially when comparing the two heavyweights and their physiques.

However, Ruiz Jr. has warned “AJ” not to make that same mistake.

After all, the Mexican-American is 32-1 and only suffered a unanimous decision defeat to former WBO heavyweight champion Joseph Parker back in 2016.

“Anthony, don’t underestimate this little fat boy,” Ruiz Jr. told Sky Sports when asked if he had a message for Joshua. “I’m coming for you, just tune in man, you’re going down.”

Unlike Miller though, Ruiz Jr. doesn’t really have anything bad to say about Joshua. However, he still remains confident that he can inflict the Briton’s first-ever defeat and become the new heavyweight kingpin.

“He’s a champion of the world. There’s nothing that I can say bad about him, besides that he’s big but you know what, I’m big too and it doesn’t really [matter] how big you are in this game. I’m a big fighter, a combination fighter, so I’m here to win.

“A lot of people underestimate me, like I said, the way that I look, my appearance, but as soon as they see me throw punches… I’m going to pull out the upset and June 1 tune in, two big heavyweights bashing their face up, and that’s the main thing.”

Should Ruiz Jr. win, he will have the distinction of becoming the first-ever Mexican heavyweight champion. It is something he is taking very seriously after getting another opportunity at the gold.

“It means a lot,” Ruiz Jr. added. “This is my opportunity, my second chance to make history, become the first Mexican heavyweight champion.

“I’ve been training really hard, we haven’t stopped training. The main thing is to stay focused and stick to the game plan and get that win on June 1. It’s kind of overwhelming, everything that happened really fast, but I’m still excited, really happy, really blessed.