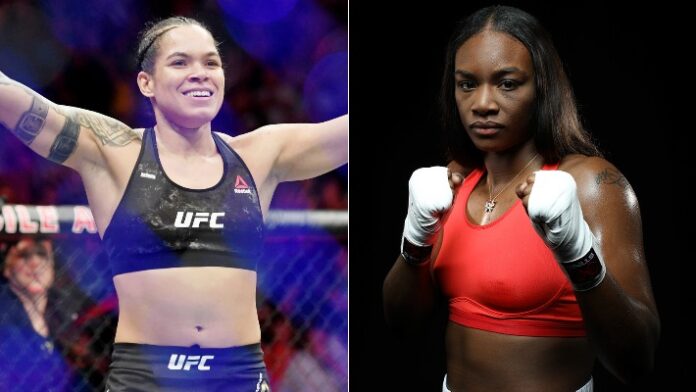 Talk has ramped up of the boxer facing two-weight UFC champion Amanda Nunes in potential crossover fights in boxing and MMA. For now, though, it looks like MMA is the plan.

But how did the whole idea even pop up in the first place? For Shields, it was when the combat sports world started labelling Nunes as having the best hands in any sport:

“That’s why I wanted to have a fight with her in boxing because when she beats girls in the UFC, the majority [of her wins] are with her hands. She knocked out Cris Cyborg with one punch. For me, I want to get in there and fight her because of that.”

Nunes doesn’t seem too interested in a boxing fight though. That is why Shields is making a compromise and venturing into the world of MMA.

Although she will be at a disadvantage, she feels she is young enough to get to grips with the many martial arts she has no experience with:

“MMA contains boxing, boxing doesn’t contain MMA,” Shields added. “That’s why I thought the fight would be more fair with boxing. I can understand her feeling like she’s coming in at a disadvantage in boxing, so that’s why I said I would gladly learn some jiu-jitsu and some wrestling, and I already know how to box.

“So I would get in the cage and do it on that side just to make it fair because Mayweather beat up McGregor in boxing, but who knows how Mayweather would do in the cage against McGregor? I feel like I’m young enough to take the time to learn these things and actually get in there and win. I don’t go into nothing like, ‘hopefully I win’, I’m going in there looking for 100-percent win factor.”

Shields expects to make her MMA debut by the end of 2020.

What do you make of Shields and her venturing into the MMA world?