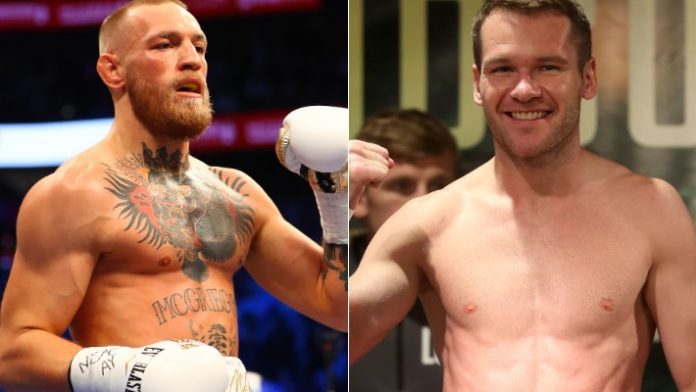 Former UFC featherweight and lightweight star Conor McGregor has been the talk of the combat sports world as of late.

The Irishman was recently in headlines after a video surfaced of him punching an elderly man inside an Irish pub this past April. McGregor allegedly hit the old man after he insulted his Proper 12 Irish Whiskey. The video drew a ton of criticism from combat sports stars, including Irish boxer Luke Keeler.

Keeler is the fifth-ranked middleweight boxer in the world and had some brutally honest comments for McGregor after the video leaked.

“Sad to see @TheNotoriousMMA stoop so low, did the same to a friend of mine couple of years ago and still walking around acting the gangster, I’d be happy to put him in his place if he had the balls to step in a ring again ??”

Speaking to Irish Boxing, Keeler claims that McGregor actually called him on the phone and was not happy about his comments. Things got so heated that “The Notorious” actually agreed to box Keeler.

“I don’t want to get into it too much, but I know he wasn’t happy about the call out. He is not happy,” Keeler said. “The fight community in Ireland is small enough and Crumlin isn’t too far from Ballyfermot. He rang me and we had a few words. I told him the fight was there to be made and he was all for it.

“He agreed to fight over the phone. Whether he has the balls or not to get in the ring again, never mind with me, we will have to see. He could have been just trying to front up or speaking in anger, but it got to the stage where I felt comfortable enough passing onto my management team.”

Keeler then expanded on the situation in some follow-up Tweets.

“He has agreed to fight after a shouting match on phone but doubtful he will. It would be quickest way for him to get Irish people’s respect back but respect and class is something he has none of and something money can’t buy”

Do you think a fight between McGregor and Keeler will ever materialize?