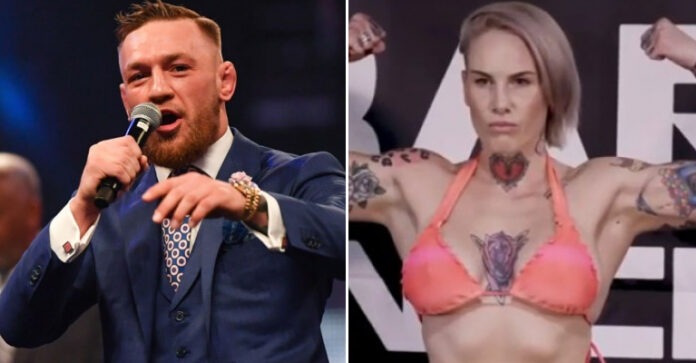 Bare Knuckle FC put on an action-packed event with their first-ever show last night (Sat., June 2, 2018) from the Cheyenne Ice and Events Center in Cheyenne, Wyoming.

The event featured three UFC veterans scoring wins (watch full highlights here) when Bec Rawlings, Joey Beltran, and Ricco Rodriguez were all victorious on a card that was deemed highly entertaining by the vast majority of onlookers.

For her part, former UFC women’s strawweight competitor Bec Rawlings got back into the win column following four consecutive losses that lead to her UFC release with a much-needed TKO win over Alma Garcia when Garcia could not answer the bell for the second round. Suffice to say, Rawlings’ bare knuckle debut was a success, and it’s drawing rave reviews from even the highest levels of combat sports.

Case in point, former two-division UFC champ Conor McGregor reacted to Rawling’s bare knuckle victory by commenting on a photo of the fight taken and posted on Instagram by MMAFighting.com photographer Esther Lin, praising how she properly punched in a style best suited for that particular form of pugilistic art:

McGregor has been out of action since losing to Floyd Mayweather via tenth-round TKO in the boxing ring last August. The MMA world is currently awaiting his official return on pins and needles, yet it may be a while off considering he’s set to appear in court on June 14 for assault charges stemming from his April attack at the UFC 223 media day in Brooklyn, New York.

After the show she put on this weekend in Cheyenne, Rawlings’ fighting future seems a lot more certain, however – and McGregor is in full approval.