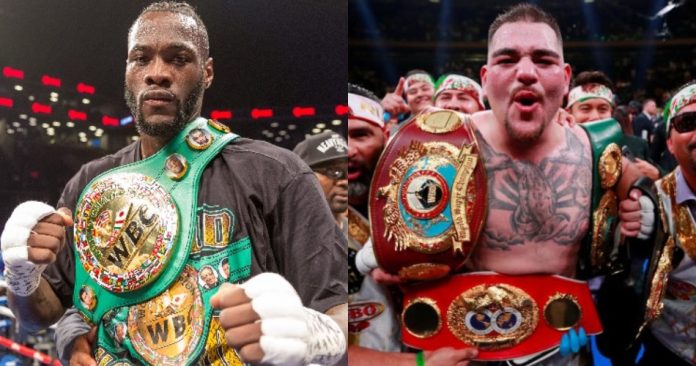 Ruiz Jr. beat Joshua in the featured bout of the event that took place on Saturday night (June 1, 2019) from Madison Square Garden in New York City. Joshua’s WBA (Super), IBF, WBO, and IBO heavyweight titles were on the line.

In the fight, Ruiz Jr. won via technical knockout in the 7th round. This was a shocking loss for Joshua, as it marked the Englishman’s first loss in his career. It also changes the landscape of boxing’s heavyweight division. For years now, many fans have wanted to see Joshua fight Wilder inside of the ring.

That fight has been delayed due to negotiation differences, while the fighters kept busy with lesser contenders. Wilder faced Dominic Breazeale in his latest fight back in early May. He knocked out Breazeale in the first round to retain the WBC heavyweight title.

Wilder recently took to his official Twitter account to offer some advice to Ruiz Jr. following his big win. He wrote:

“A huge congratulations to you Andy Ruiz Jr. for your upset win last night. You’ve been blessed to come out of the struggle and to become the 1st Mexican Heavyweight Champion Ever! Wow, that’s amazing and I’m wishing you many more blessings to come.”

“P.S It’s all up to you in what you do with this huge opportunity. There’s many perks that comes behind it. Blessings.”