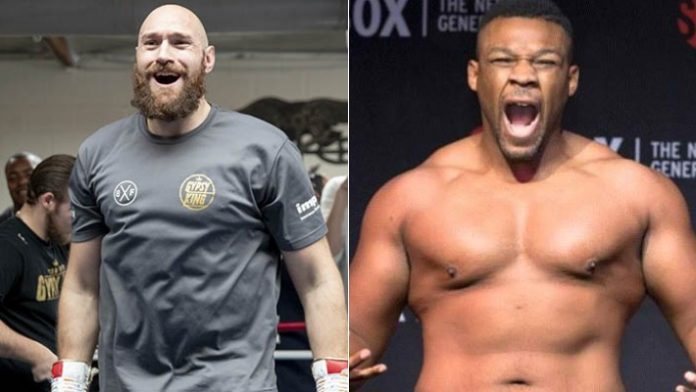 Jarrell Miller does not appreciate Tyson Fury’s recent comments about him.

“The Gypsy King” recently said that he once knocked Miller down several times in a sparring session (via Metro UK):

“I hired him for two weeks sparring, I ended up sending him back home after one day,” said Fury. “I put him down seven times in the first spar and sent him packing back to the USA.”

However, during a recent interview with iFL TV, Miller refuted those claims, also taking shots at Fury’s past issues with addiction. “Big Baby” added in “It’s never happened”:

“I’ve hit Tyson Fury with so many left hooks in the head and body in the one camp I went to it’s amazing.”

Miller is currently gearing up for the biggest fight of his career. He’ll face WBA (Super), IBF, WBO, and IBO heavyweight champion Anthony Joshua. They’ll main event from Madison Square Garden in New York City on June 1st. Joshua is undefeated at 22-0, with 21 of his wins coming by way of knockout.

As for Miller, he is also undefeated in his boxing career as well. He sports a record of 23-0-1. In his last fight, he defeated Bogdan Dinu with a fourth round knockout. Should Miller defeat Joshua, it will be one of the biggest upsets the division has ever seen.