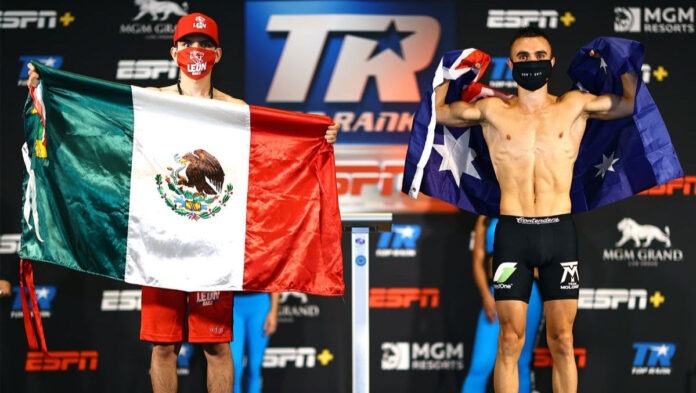 Australia’s Jason Moloney (20-1, 17 KO) and Mexico’s Leonardo Baez (18-2, 9 KO) will headline tonight’s Top Rank card when they square off in their bantamweight clash inside the MGM Grand Conference Center in Las Vegas. The six-fight card is set to start at 8 pm (ET)

Moloney was ringside on Tuesday night, where he witnessed his twin brother Andrew lose in an upset to Joshua Franco, and will be aiming to ensure that he does not suffer the same fate. The 29-year-old is ranked in the top five with all four major sanctioning bodies and is looking to build a case for a title shot.

Baez took this fight on short notice, but the rugged 24-year-old will undoubtedly see this as his opportunity to crash Moloney’s party and make a name for himself in the bantamweight division. He is an aggressive fighter who enjoys forcing the action which bodes well for those looking to see an entertaining dust up.

The co-main event sees the undefeated Abraham Nova (18-0, 14 KO) taking on Avery Sparrow (10-1, 3 KO) in a ten-round super featherweight contest. Nova is an up and coming Top Rank prospect originally from Puerto Rico. He turned pro in 2016 after an extensive amateur career.