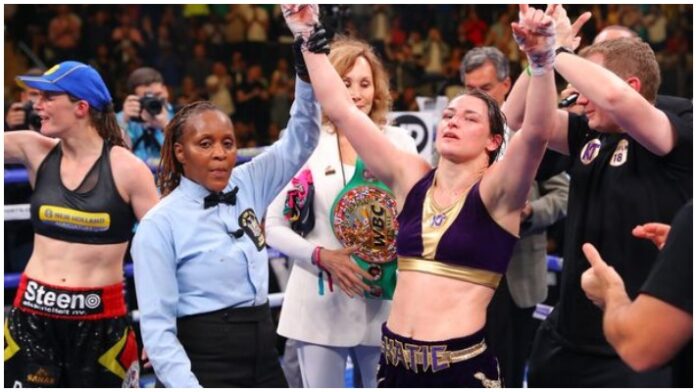 Undisputed lightweight champion Katie Taylor will put her titles on the line in a highly anticipated rematch against Delfine Persson on August 22. The bout will serve as the co-main event on a Matchroom Boxing – Sky Sports pay-per-view card topped by Dillian Whyte vs. Alexander Povetkin.

Irish superstar, Taylor became the undisputed queen at lightweight by beating Persoon via majority decision in New York last June. The Belgian fiercely protested the decision and will now get her rematch against Taylor who has since gone on to claim the WBO super-lightweight belt and become a two-weight world champion.

Speaking to Sky Sports after the rematch was announced Taylor expressed her delight at making the biggest fight available and promised to leave no doubt when she rematches Persoon.

“With Amanda Serrano not taking the fight, I wanted the biggest fight possible in August, and I think a second Persoon fight is one that everyone wants to see,” said Taylor.

“I’ve been looking forward to a rematch ever since the first fight and I’m delighted it’s been made. It was definitely very close first time around, but I felt I deserved the win and I intend to leave no doubts in the rematch.”

Persoon told Sky Sports she is ready to get the win she should have got at Madision Square Garden in 2019, she said.

“I am ready to get the victory following the injustice last June in New York. Not by words, but in the ring – I am ready!”

Matchroom promoter Eddie Hearn seemed delighted to have added the fight to his already stacked August 22 card, he said.

“Wow! What a fight – what a night! To be honest I can’t quite believe this fight has been made. I can’t give enough credit to Katie and Delfine for agreeing to do it again.

“Since their epic ‘Fight of the Year’ contender at Madison Square Garden last year, everyone has wanted to see this once again and now we have it. I’m very proud to stage this fight, especially at such a critical time for our sport – along with Whyte vs Povetkin, August 22 will be one not to forget.”

Who wins on August 22? Katie Taylor or Delfine Persoon?