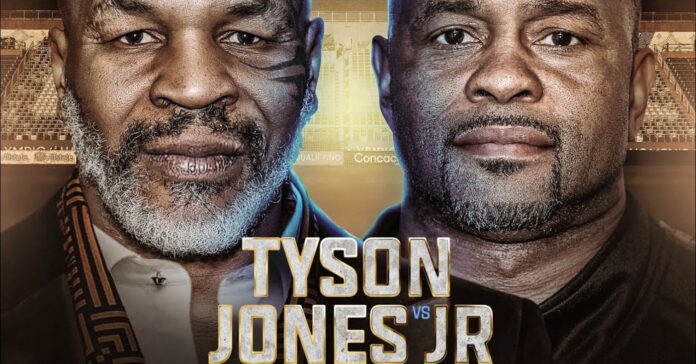 Mike Tyson will return to the ring on September 12 for the first time since 2005. He’ll face fellow boxing legend Roy Jones Jr. in an eight-round exhibition bout. According to The Athletic, the pay-per-view event will be available for $49.99 “through cable, satellite and Triller.”

Although no other fights have been announced it has been reported YouTuber Jake Paul will be boxing former NBA guard Nate Robinson on the undercard. While fans can also expect a variety of performances from musicians on the night.

In an interview with BoxingScene.com California State Athletic Commissioner Andy Foster stated that the only way for Tyson or Jones Jr to win would be either via a knockout or a stoppage. He also shared that neither fighter will be wearing headgear and that they will both be using 12-ounce lace-up gloves.

Tyson who was known for his vicious punching power will be going all out for the knockout on fight night, he said.

“Anybody who knows me, I don’t know how to [take my foot off the gas]. I just know one way of fighting and that’s just what it is.”

Jones Jr. on the other hand is hoping to survive the early onslaught and beat ‘Iron Mike’ in the later rounds.

Tyson is now 54 years old and hasn’t fought since losing to Kevin McBride in 2005. Jones Jr is 51 years old but has been much more active. He last fought in 2018 and is currently riding a four-fight win streak.