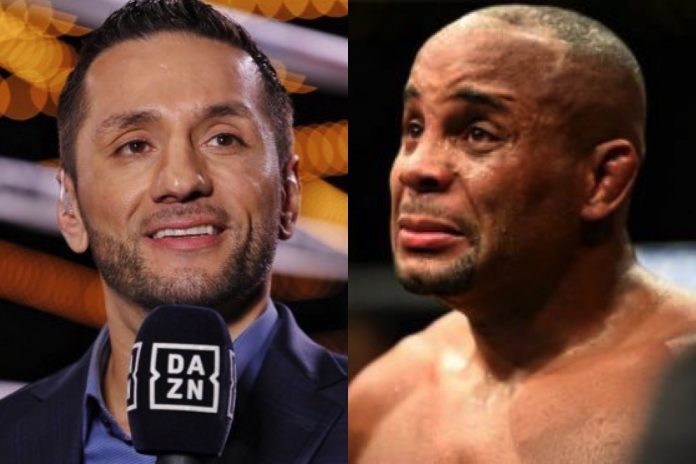 It appears the online beef between UFC heavyweight champion Daniel Cormier and former boxing champ Sergio Mora has spilled into other forms of media.

Cormier offered some criticism of Mora’s broadcasting of the Canelo Alvarez vs. Daniel Jacobs boxing match last weekend. Mora immediately fired back by claiming Cormier’s striking sucks with a jab about his Jon Jones losses.

Mora claims he’s not mad about the exchange, but he’s not exactly letting it go, either. Appearing on SiriusXM’s “At the Fights” with hosts Randy Gordon and Gerry Cooney Monday (via MMA Junkie), Mora called Cormier’s criticism ‘unprofessional.’ He also said if ‘DC’ came at him, he would, of course, return fire:

“I’m not pissed off, and I never met the guy,” Mora said. “I know of him, I know that he is the UFC champion. I know that he also does analyst work for the MMA, and I just think it was unprofessional – and yeah, you come at me like an asshole, I’m going to return it.”

Alvarez beat Jacobs via unanimous decision, with judges rendering scores of 115-113, 115-113 and 116-112 for the fan favorite. Those scores suggested a close fight. But Cormier took issue with the announcing, saying that Mora was incredibly biased for Alvarez.

Show host Cooney, a former heavyweight title challenger himself, did admit he was disappointed by the fight. But he supported Mora, noting the former champ has “just got to let it go and keep moving forward and talking the game you know.” Mora appreciated that sentiment and understanding.

“That’s because you’re a fighter turned commentator, Gerry,” Mora said. “They don’t realize how hard it is. So, yeah, the transition is difficult, and as a fighter, we don’t take criticism lightly because if we get criticized in a fight, we go in there and whoop someone’s ass. You can’t do that as a broadcaster.

“Broadcasters just have to suck it up, unless the heavyweight champion in another sport does it, then (expletive) him.”