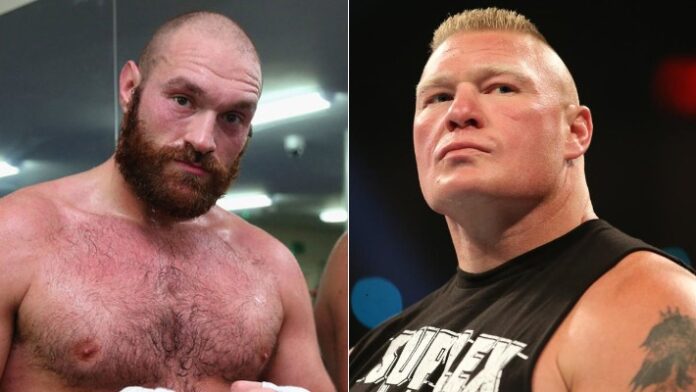 Boxing lineal heavyweight champion Tyson Fury wants to fight everybody. Fury has talked about fights with top UFC heavyweights in MMA, his rematch with Deontay Wilder and fights with other top boxing heavyweights, and now, a fight with Brock Lesnar.

“Yeah, I fancy a fight with Brock, for sure,” Fury said. “I watched a few of his fights. (He’s) pretty handy, but I can flatten him. In a WWE match or in a proper fight, I can flatten Brock Lesnar in 30 seconds.”

It would certainly be interesting to see Fury take on Lesnar in any capacity. Should he truly venture into MMA, his boxing skillset will give him a fighting chance. Of course, he’ll have to go up against some well-seasoned grapplers such as Stipe Miocic, the current champion in the UFC heavyweight division.

Lesnar himself is also known for his wrestling ability, so any chance Fury would have against Lesnar – currently retired from MMA – would have to be with keeping the fight standing. Fury appears serious about a future run in MMA, as he recently held a training session with top UFC middleweight and fellow countryman Darren Till. Till himself believes there’s a 70 percent chance Fury actually fights inside the cage.

What do you think about a potential fight between Fury and Lesnar?