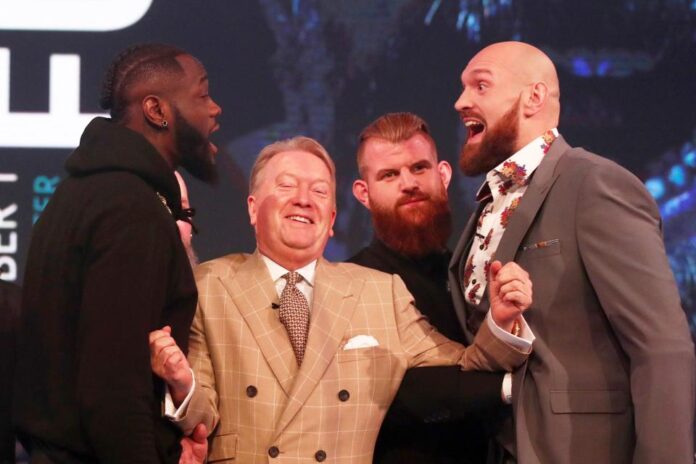 The UFC was in Rochester, New York, for an extremely entertaining card last night, yet much of the combat sports world was focused on a different part of the state. WBC heavyweight champion Deontay Wilder met Dominic Breazeale for the title from the Barclays Center in Brooklyn, New York.

What resulted was sure to be one of the best boxing knockouts of the year when ‘The Bronze Bomber’ floored Breazeale with an absolutely vicious straight right in the first round.

It was a great win to be certain, yet most felt Wilder should have been facing rival Tyson Fury after their classic majority draw last year. While that fight has gone by the wayside for the time being, Fury still spoke up on Wilder’s win. He released a statement on his Instagram account congratulating Wilder (transcribed by MMA News):

Called Them All Out

‘The Gypsy King’ didn’t stop there, however, calling out Anthony Joshua and Dillian Whyte. He closed by calling Wilder the ‘second baddest man on the planet’:

“Anthony Joshua, you’ll get it as well. Same thing will happen to you. Dillian Whyte [too]. ‘The Bronze Bomber’ is the most fearsome, most destructive puncher in the heavyweight division. But it’s just a pity that he had to lose to ‘The Gypsy King.’ Anyone that stands in front of Deontay Wilder, he will knock ’em out. Deontay Wilder is the second baddest man on the planet behind ‘The Gypsy King,’ AKA Tyson Fury, the number one heavyweight in the world. Nobody can beat me. I can’t be touched.”

Listening to Fury talk about his potential opponents, it’s hard not to salivate over the match-ups the heavyweight division could put on right now. But with each top fighter having their own streaming deals, it seems like those fights are going to difficult – if not nearly impossible – to get booked anytime soon.

Let’s hope that isn’t the case.

In the meantime, Fury will take on German Tom Schwarz on June 15.