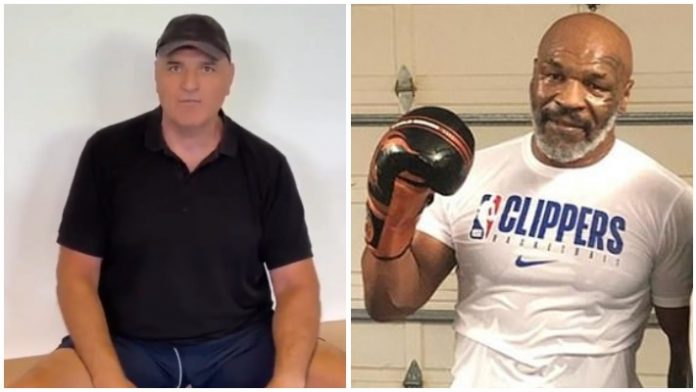 John Fury, the father of heavyweight champion Tyson Fury has spectacularly called for a fight against boxing legend Mike Tyson.

Fury recently accepted a fight with a bodybuilder who called him out. The 55-year-old has now backtracked on that idea as he clearly has bigger fish to fry. In a viral video Fury has called for a fight with former heavyweight king Mike Tyson instead, he said,

“I’m looking at fighting Mike Tyson. How’s that? Mike’s making a comeback—I don’t value my life for 50 pence. Let me tell you something, Mike Tyson is worth doing charity with. He’s a proper king of a champion. He’s a proper man, tried and tested.

‘He’s making a comeback,” Fury continued. “I know Mike Tyson has mentioned me boy’s name every five minutes — here I am. John Fury is hiding from no man, not even the king of the old men. Mike Tyson! I will fight Mike Tyson! I will not be denied. I will die in a fight. I will die before I’ll give in, (Transcribed by BJPenn.com)

The boxing world has been in hysterics since ‘Iron Mike’ announced he’d be returning to the sport for some exhibition bouts in the near future, he said.

“I’ve been hitting the mitts for the last week. That’s been tough, my body is really jacked up and really sore from hitting the mitts. I’ve been working out, I’ve been trying to get in the ring, I think I’m going to box some exhibitions and get in shape. ‘I want to go to the gym and get in shape to be able to box three or four-round exhibitions for some charities and stuff. ‘Some charity exhibitions, make some money, help some homeless and drug-affected motherf*ckers like me.

“I do two hours on cardio, I do the bike and the treadmill for an hour, then I do some light weights, 300, 250 reps. ‘Then I start my day with the boxing thing, I go in there and hit the mits, 30 minutes, 25 minutes, start getting in better condition. ‘I’m starting to put those combinations together. I’m in pain, I feel like three guys kicked the s*** out of me.” (Transcribed by Metro)

The speculation about who he’ll fight has gone into overdrive. It has been amplified by the fact Tyson’s biggest rival Evander Holyfield has also announced he’ll be fighting again at 57 years old.

Do you want to see John Fury and Mike Tyson throw down?