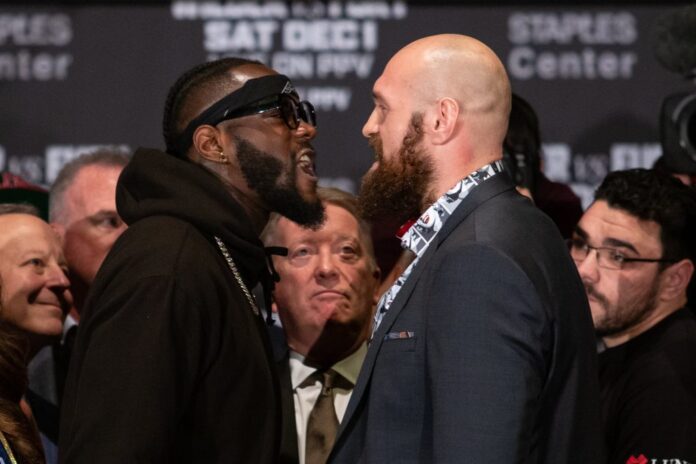 Bob Arum is a very optimistic man. Arum is now in business with lineal heavyweight boxing champion Tyson Fury, who is inked to a multi-fight contract with Top Rank and ESPN.

Fury is now making a name for himself in the United States, after downing Tom Schwarz in Las Vegas this past weekend (Sat. June 15, 2019). Speaking at the post-fight press conference, Arum discussed the expected rematch between Fury and WBC heavyweight champion Deontay Wilder next year.

Arum went as far as predicting the matchup can do equal to or more pay-per-view (PPV) buys than the famed Floyd Mayweather Jr. vs. Manny Pacquiao fight, which did over four million buys:

“Well, if – and I expect both guys get through their next fights, the fight will be first quarter of next year, Arum said. “And, I really believe – now, I’m not blowing smoke, it will be on pay-per-view, and I can’t see why that fight won’t equal or surpass the numbers that were done on the Mayweather-Pacquiao fight.

“Two little guys, great fighters, Mayweather and Pacquiao, was built up for a lot of years, but still they’re not heavyweights. They’re not heavyweights of this kind of category, and now, this notoriety. The reason the Fury-Wilder fight, first one, didn’t do real numbers, is because, let’s be honest, other than some hardcore boxing fans, the public in America didn’t know this guy [Tyson Fury].

“They really didn’t know him. Now, they know him, and after the fight in October, they will know him even more. Wilder will hopefully have a great fight with Ortiz and beat Ortiz, and the rematch, I think, is capable of doing over four million pay-per-view orders.”

When pressed on his prediction that Wilder vs. Fury II can do bigger numbers than Mayweather vs. Pacquiao, Arum doubled down:

“Why wouldn’t it be?,” Arum asked. “People always, when I was in the business for many years, always look for the big big heavyweight fight. That was Ali-Frazier one, did more business than any other fight had ever done up to that point. I can’t see why this wouldn’t happen.

“And particularly when it matches somebody from the U.K., who is not coming over as an opponent, but as a co-equal at least, in stature, with an American. It’s got to, reasonably speaking, do tremendous business on PPV.”