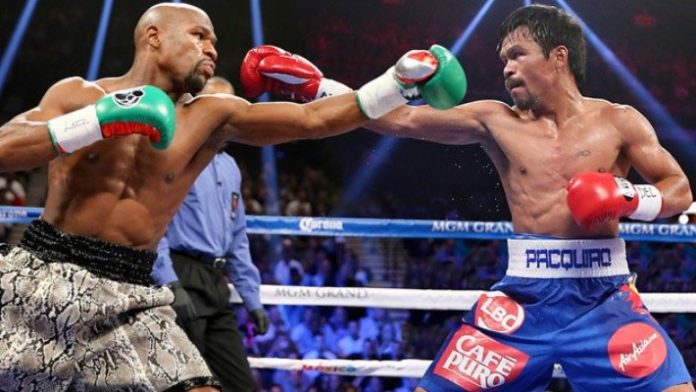 Since Boxing had to take a break due to COVID-19 discussion arose between who has had the better career of boxing legends Floyd Mayweather and Manny Pacquiao.

Many people chimed in on the discussion including Boxing hall of fame trainer James “Buddy” McGirt. Speaking to EsNews, McGirt weighed in stating that he thought Pacquiao has had the better career.

“I’d say the 8-division champion, because it’s something you will always be remembered for,” McGirt told Elie Seckbach.

“You still got a lot of money, you don’t have a billion dollars, but you got something your kids and grandkids could remember. It’s a legacy, something that lives on forever.” [Transcribed by IBTimes]

Another Hall of Famer who weighed in on the conversation was Bernard Hopkins who shared the same opinion as McGirt, stating that Pacquiao never turned down a fight whereas Mayweather always saw the sport as a business.

“I’d rather have Manny Pacquiao’s legacy than Floyd Mayweather’s. Manny fought everybody and Floyd fought guys (on his watch). Also, I don’t think Floyd gave two you-know-whats about how people feel whether he fought the best guys or not. It was strictly business for Floyd,” Hopkins pointed out. [Transcribed by IBTimes]

In their highly publicized bout back in 2015, Mayweather emerged victories over the Filipino champ largely believed by many to be the greatest of all time. Some believe Pacquiao was robbed in the fight and have been rallying for a rematch in the years since.

While Pacquiao has remained active, Mayweather has not shown interest in the rematch instead opting for money fights like his 2017 bout with MMA superstar Conor McGregor.

There has been talks of both boxing champions facing off against the MMA icon, with Pacquiao signing to Paradigm management, the same organization McGregor is a part of.

Who do you think would win in a rematch between Mayweather and Pacquiao?