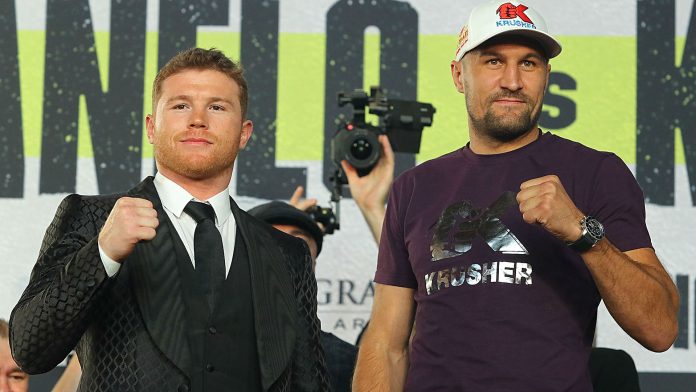 Eyebrows were raised when it was officially announced that Saul ‘Canelo’ Alvarez would move up to light-heavyweight to contest the formidable Sergey Kovalev for his WBO title later this year. The surprise match-up at 175 pounds has been scheduled for November 2nd and it’s at the MGM Grand Garden Arena in Las Vegas where ‘Canelo’ will aim to secure a historic win and bolster his career legacy.

Russian puncher Kovalev has been one of the best fighters in the sport for the past five years, since becoming a dominant light-heavyweight world champion and going through plenty of high-profile opponents during an admirable title reign. While ‘Krusher’ has been dubbed by many fans to be past his best, it’s clear that he holds a huge size and reach advantage going into this unexpected showdown with boxing’s biggest financial draw and attraction on American soil.

In spite of the fact it’s the Mexican that will take to the ring in Las Vegas as the man moving up quite a bit in weight, he is seen as the front runner for a famous victory with leading bookmakers offering odds of -400 for him to win outright. A quick scroll down a list of online bookmakers in the UK and punters will see that despite Canelo being the fighter jumping up divisions, he is the one regarded as the odds-on favourite to prevail in this anticipated match-up.

The now 29-year-old was previously criticised for delaying the eventual fight with Gennady Golovkin and contesting lower division opponents due to supposedly ‘not being ready for middleweight’ in the past. But he has since become the main man at 160 pounds after a rematch triumph over bitter rival ‘GGG’ in which he clinched several of the division’s world honours. Meanwhile, he made a temporary step up to super-middleweight as well to take the lesser-regarded WBA ‘regular’ belt from Liverpool’s Rocky Fielding before Christmas last year.

It’s been evident for a long time that Canelo’s frame and bulky stature would ultimately see him compete higher up in weight but his decision to do battle with light-heavyweight champion Kovalev still caused a big shock in the sport.

Can the Mexican boost his legacy?

Alvarez has already reigned supreme at both light-middleweight and middleweight in his evergrowing career to date and got his hands on another belt at super-middleweight too. While he is one of the best pound-for-pound fighters on the planet and clearly the leading light in terms of global attraction, is this a step too far?

Kovalev may well have lost a step in recent years and at 36 isn’t the supreme threat he once was. But he still represents a huge task for Canelo in Sin City. Canelo will have to deal with the solid jab coming at him from ‘Krusher’ and get into a more beneficial distance to unleash his deadly body attack, in order for this to swing in his favour.

The Mexican can be backed at +187.50, among leading bookmakers, to win by stoppage against Kovalev in their awaited showdown. The Russian has shown himself to be vulnerable to sustained body shots in the past, but Canelo isn’t exactly a devastating puncher and Kovalev won’t stand in front of him for 12 rounds to withstand a strong body attack. Therefore, this looks set to be another long and tactical battle with Canelo being lined up for a hugely impressive points victory at -110 in what is his familiar stomping ground of Las Vegas.

Such a result would undoubtedly see Canelo’s reputation rocket even further, despite Kovalev coming to the latter stages of his career, and one which would see him become another in a long list of great combatants to come from Mexico.