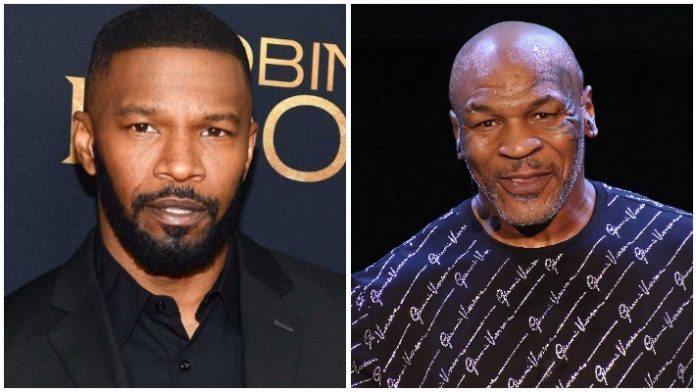 Academy award-winning actor Jamie Foxx has confirmed the planned Mike Tyson biopic has been given the green light after years of delays have prevented the movie from being made. In 2014 it as announced Foxx would be playing ‘Iron Mike’ in a film that would depict the life of boxings youngest ever heavyweight champion.

During an interview with filmmaker Mark Birnbaum on Instagram Live, Foxx revealed the Tyson move is finally coming together, he said.

“It’s a definitive yes. Doing biographies is a tough thing. Sometimes it takes 20 years to get them done, but we officially got the real ball rolling.

“I met Mike Tyson in the weirdest way, I was on stage doing stand-up years ago [when I was 22]. I get to my Mike Tyson joke and nobody claps, nobody laughs. You know why? Because Mike Tyson was watching.

“So I started hanging out with Mike Tyson so I got to see Mike in two different ways, two different lives. I saw him at the height of his career and then when things got bad, things got bumpy, I also saw him as well, so what I’m excited about the movie is to show those moments of the different Mike.”

Foxx explained the movie will show Tyson’s evolution from an angry young man to the loveable entertainer who often graces our screens today, he said.

“That’s the person that we want to show. We want to show everybody evolves. Everybody comes from a good or bad place and I think when we lay the layers on Mike Tyson in this story, I think everybody from young and old will be able to understand this man’s journey and the way we’ll place it.”

The 52-year-old actor is so confident his ability to pull off the role he thinks fans will mistake him for the real Tyson.

“I guarantee you, people will run up on me in the street and ask for an autograph and think that I’m Mike,” Foxx said.

Are you excited to see Jamie Foxx play Mike Tyson in film?