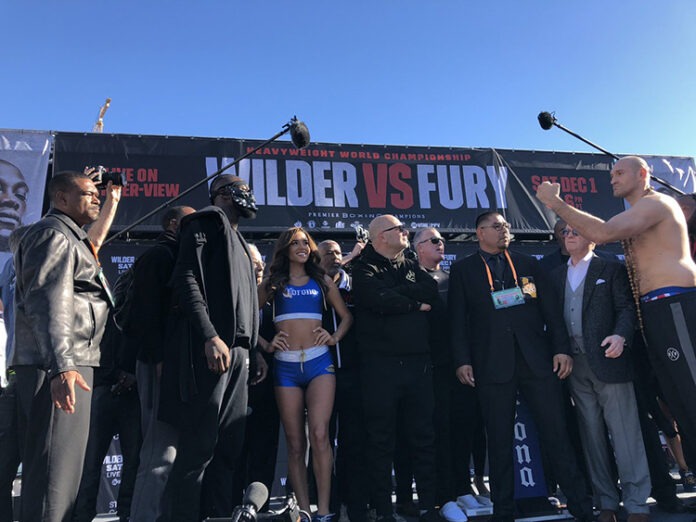 Deontay Wilder met Tyson Fury tonight (Sat., December 1, 2018) in one of the most anticipated heavyweight title fights in recent memory. The WBC heavyweight champ faced off against the lineal champion from the Staples Center in Los Angeles, Calif.

Fireworks were on the docket when Wilder (40-0, 39 KOs) puts his gold on the line against Fury (27-0, 19 KOs). The outspoken-yet-troubled star sought to regain his throne as the best heavyweight. To do so, he had to topple the surging Wilder. Fury had won two straight fights since taking all of 2016 and 2017 off due to severe mental health issues. Wilder, meanwhile, was looking to extend his streak of title defenses to eight.

Both fighters talked a vast amount of trash heading into last night’s pay-per-view (PPV) main event. Based on their thunderous knockout percentage, this massive title fight was expected to end before the final bell.

You can find out how to watch the PPV online here. We’ll have live streaming results of the card right here. Finally, we’ll provide round-by-round results of the main event starting roughly around 11:30 p.m. ET.

The fighters met in the center of the ring. Wilder threw a light jab. He looked to go to the body a few times. Wilder was aggressive early. Fury snapped a jab and taunted Wilder. Wilder stalked him into the corner and threw some wild hooks. Fury clinched again to neutralize it, then landed a jab. Fury scored on an uppercut in the clinch, and Wilder countered with a solid left hook. Fury looked to work the body and landed his jab again. Wilder snapped more punches and missed on a big one. Fury opened up with a combo to the delight of the crowd as the opening frame came to a conclusion.

The action was measured to start the second. Both fighters stayed on the outside and pawed jabs. Wilder pushed forward more, yet didn’t score a ton. Wilder landed a glancing one-two combo, and Fury snapped a short right hand. Fury taunted again and worked his jab, doubling up on the strike. Fury then went to the body. They traded jabs and Wilder landed some punches in close. Fury clinched in a kind of headlock and the referee separated them. Wilder landed a strong right hand that briefly snapped Fury’s head back to close the second.

Fury came out with the jab again to start the third. Fury worked some unorthodox feints. Wilder snapped a jab in response, following with a shot upstairs. Wilder dug a huge left to the body for one of the fight’s most significant punches. Wilder threw huge shots, but Fury evaded to land his own right hand over the top. Wilder swung wild again, yet Fury worked the body. The ref broke another stalemate and Fury dug to the body. The fighters traded shots at the bell to end the third.

Wilder pushed forward with his right hand in the fourth, but Fury voided it well. He backed Wilder up with a right hand himself. Wilder was throwing a bit wide and wild. Fury began to advance a bit as a result. A hook upstairs and jabs landed for “The Gypsy King.” Wilder snapped a short right hook and Fury three shots of his own. Wilder stalked him, throwing more wild shots as Fury taunted. Fury had some blood coming from his nose as the fourth round ended.

Wilder was missing on his jab and right hand. He does score a short left uppercut. A double jab followed.

Wilder continued to look for his wild right hand, but again it was ineffective. Fury walked Wilder down with some good shots, opening some swelling on Wilder’s eye. Wilder did land his jab this round somewhat. He scored with a short right hand and a combo towards the end of the round.

Fury was snapping accurate shots. His one-two was working to cheers. Wilder was wild and stalking Fury, but not landing cleanly. He did score a one-two in close, which Fury countered. Fury’s one-two landed upstairs and the crowd goes wild. Again Wilder stalks. Close round but Fury may have won it.

Fury was confident in the eighth. He taunted Wilder and landed his accurate jab and right hand. Wilder looked to be getting a bit frustrated. More wild shots missed from Wilder. A left hook to the body did land. Wilder landed some hard shots to close the round, but Fury laughed them off.

Wilder’s left eye had some swelling. Fury snapped his jab again. Wilder landed a hard shot. He followed with a one-two combo. All of the sudden, Wilder dropped Fury with a right hand to the ear that set off his equilibrium. Momentum shifted a bit as Wilder unloaded. Fury still kept pushing forward. Wilder was landing much more effectively but Fury egged him on. Wilder swung wild but Fury still pushed forward throwing punches. This round was Wilder’s best by far.

The action was hot to start the 10th round. Fury landed upstairs. He threw a combo that was mostly blocked. Fury landed a one-two combination. Fury clinched and the ref broke it. Wilder wasn’t doing much after a huge ninth round. A solid uppercut and a right landed from Fury. Wilder landed some decent shots in close. Fury came back with a right hook. A one-two combo followed. Wilder threw wild to close the round, but few of his strikes landed clean.

Wilder came out with a jab to the body. The action was somewhat slow as the fighters looked for a spot. Fury walked down Wilder. “The Bronze Bomber” was stifled. Wilder swung wide again as Fury bobbed and weaved with great efficiency. Fury was surprisingly fresh for the 11th round. Wilder just couldn’t come up with much. He did land a left. Wilder loaded up with some huge shots that just didn’t land cleanly again. The bell sounded on another good round for the lineal champion.

Wilder dropped Fury with a huge right and a left hook behind it to start the final round. High drama was at hand. Somehow, Fury got to his feet. Wilder unloaded with huge shots. He pressed the action relentlessly. A minute-and-a-half remained. Fury still fought back with his own shots. Fury clinched in an effort to smother Wilder. Wilder swung and missed on two big shots to close the twelfth round. The fighters embraced in an emotional share of respect. Amazing fight.