Home Boxing News George Foreman Says ‘Boxing Is Nothing To Play With’ Ahead of Mike... 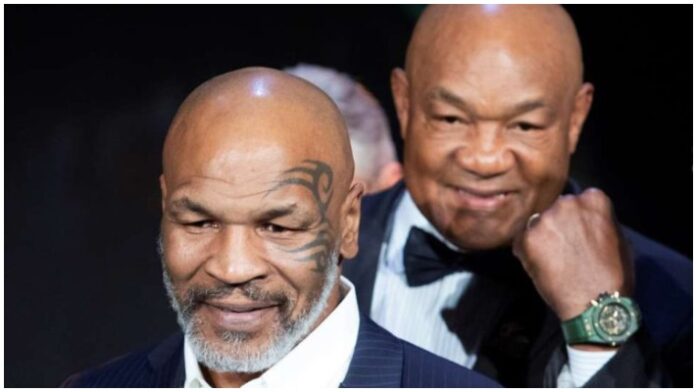 Former heavyweight champion George Foreman believes Mike Tyson and Roy Jones Jr. are in a “really dangerous” spot after agreeing to square off on September 12.

The eight-round exhibition clash was confirmed earlier this week, it will take place in California and be available on pay-per-view through the Triller app. Tyson and Jones Jr. will also be using some of the funds generated to support several charities.

‘Iron Mike’ announced a few months back he would end his 15-year retirement from boxing to take part in a few exhibition bouts. The youngest ever heavyweight champion was linked to a fight with his long-time rival Evander Holyfield, several MMA fighters, and even a bare-knuckle boxing bout before ultimately deciding to take on Jones Jr.

Tyson is now 54 years old and was beaten by journeyman Kevin McBride in his last outing back in 2005. Jones Jr. is a four-weight world champion who last fought in 2018. He is currently riding a four-fight win streak at 51 years old.

Foreman became the oldest heavyweight champion in boxing history when he stopped Michael Moorer in 1994. He recognizes Tyson and Jones Jr are doing a “beautiful thing” on September 12 but is also worried for their health.

“There’s a time when you’ve got to worry about your health, but it’s a beautiful thing that they would even come out [and fight],” Foreman told TMZ Sports. “Perhaps they can name a charity to be the recipient of the funds. I think it’s good to come out, but it’s got to be a fun thing.”

“Boxing is nothing to play with. I would tell them that it’s really dangerous. But when you make up your mind to do something like that, you can’t tell them not to do it. They’re not going to hear that. Even me, a big fool like me, back in the day, I only saw what I wanted to see,” Foreman said.

Do you agree with George Foreman? Is it dangerous for Mike Tyson to be stepping back in the ring after 15 years out at 54 years old?