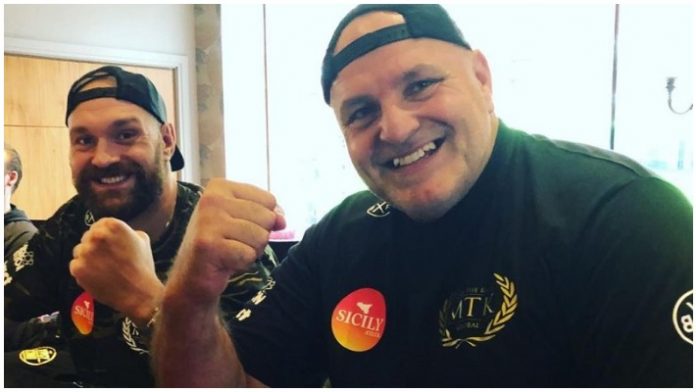 Tyson Fury’s father, John Fury has agreed to end his retirement after being called out for a bare-knuckle boxing fight.

Fury is a former bare-knuckle boxing champion who competed in the 1980’s. He has famously never lost a bout and now has the chance to add another win to his record.

The 55-year-old has responded to the fight offer from 56-year-old body builder Micky Theo, who previously took issue with Fury declaring himself the fittest man of his age in the world.

Speaking on YouTube Theo called out Fury. “I’m 56 years of age and I believe I’m fitter than John. I believe I could beat you in a proper boxing match.”

In an interview with IFL TV, Fury accepted the fight and warned his future opponent he’s messing with the wrong man, he said.

“Just replying to a video I’ve just seen there. A bodybuilder wants to fight me. That ain’t no problem mate, don’t know you, don’t wanna know you. But let me tell you something, mate, you’re messing with John Fury here mate and I am the best 50-odd-year-old man in the world. And I will stand on what I say, mate.

“I’ll either fight you in the ring, which you can forget about that one pal, I’ve fought world-class men in my time. Let me tell you this my old mate, I will fight you gypsy style, don’t you worry about that. I have never, ever denied a challenge in my life my friend. You’ve mentioned my name, you’ve gotta fight now.”

Fury has risen to fame as the proud father of the greatest heavyweight boxer on the planet. He stole the show in a recent documentary that followed his son during his comeback in boxing and throughout the fight against Deontay Wilder in February.

Would you watch if John Fury and Micky Theo actually fought?