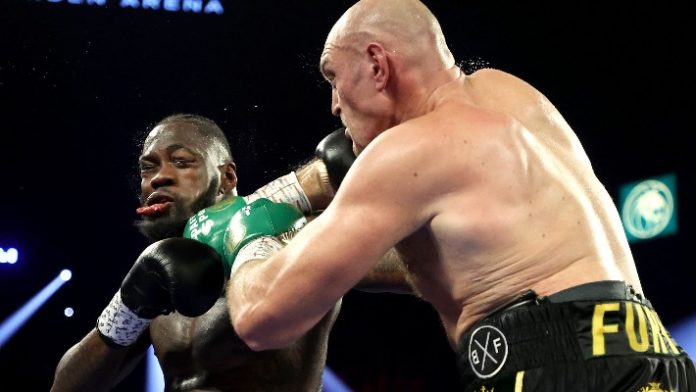 Tyson Fury is itching for the trilogy fight with Deontay Wilder.

Fury became the new WBC heavyweight champion following a seventh-round TKO win over Wilder in their rematch last month. A third meeting was booked between the pair soon after with Wilder invoking his contractual rematch clause.

It was initially set to take place July 18. However, with the ongoing coronavirus pandemic, it is now postponed until October at the very least. And Fury is getting restless as he wants nothing more than to outclass the American once again once the world returns to normal:

“I’ll be obliged to give him a bit more, you never get bored of beating Deontay Wilder up, it’s just one of those things you take great pride in doing,” Fury said on Good Morning Britain when asked (via the Daily Mail). “I really did what I said I was going to do. Not many people in boxing say something then do exactly what they said they were going to do.

“So I was quite proud of the performance and I’m really looking forward to getting all this coronavirus out of the way and getting the world back on track and getting back to my job.”

Fury and Wilder’s first meeting ended in a controversial split decision draw. Despite Fury getting knocked down twice, many felt he deserved to win after outboxing Wilder for majority of the fight.

The rematch last month was more definitive with Fury knocking Wilder down twice before overwhelming him with strikes in the seventh round.

Hopefully, things will have calmed down by October and we also get a definitive end to the trilogy.

Do you expect Fury to win the trilogy?